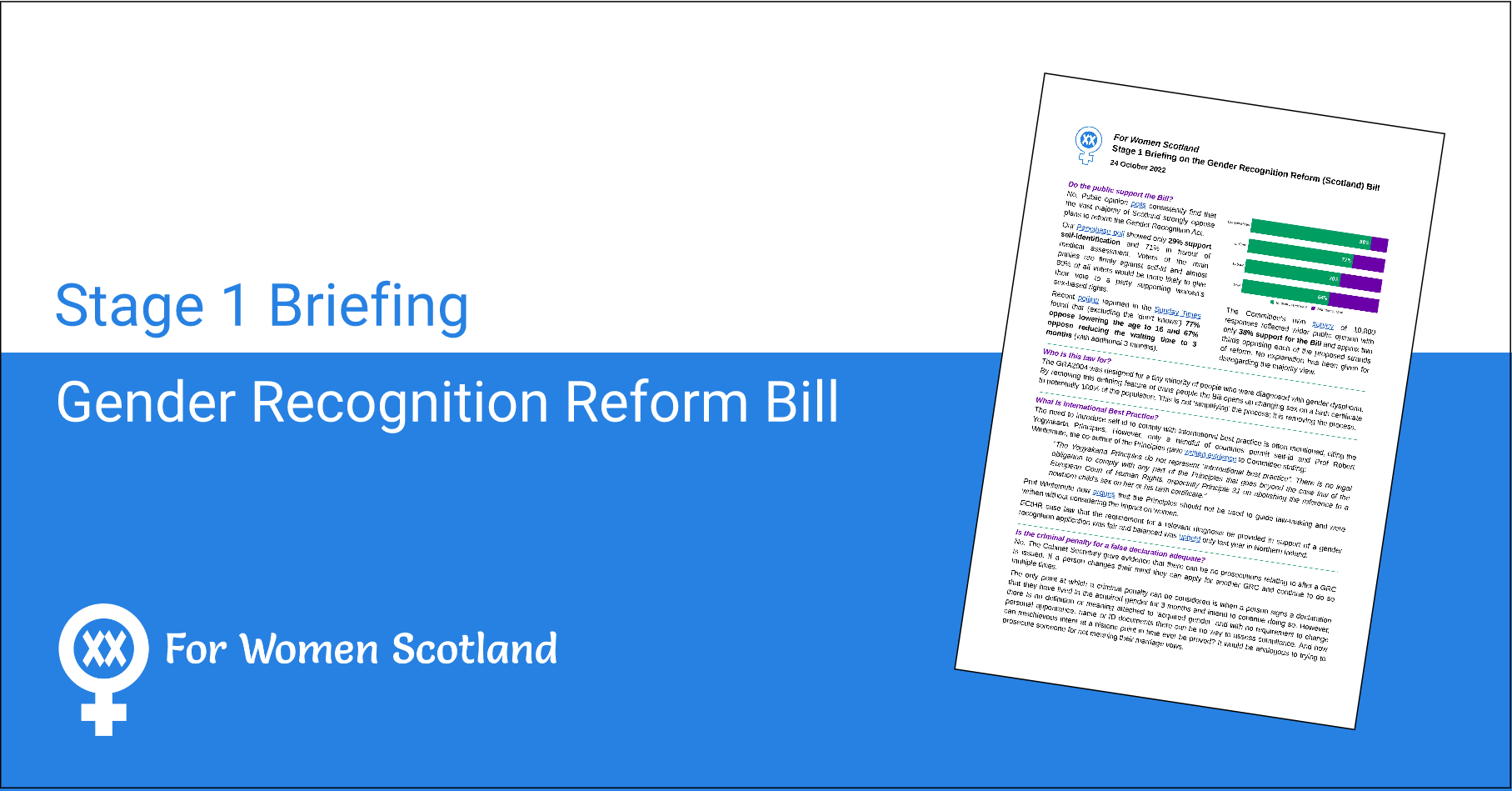 The following briefing was sent to all MSPs as a PDF on 25th October ahead of the Parliamentary debate on the 27th.

Do the public support the Bill?
No. Public opinion polls consistently find that the vast majority of Scotland strongly oppose plans to reform the Gender Recognition Act.

Our Panelbase poll showed only 29% support self-identification and 71% in favour of medical assessment. Voters of the main parties are firmly against self-id and almost 80% of all voters would be more likely to give their vote to a party supporting women’s sex-based rights.

Recent polling reported in the Sunday Times found that (excluding the ‘don’t knows’) 77% oppose lowering the age to 16 and 67% oppose reducing the waiting time to 3 months (with additional 3 months).

The Committee’s own survey of 10,800 responses reflected wider public opinion with only 38% support for the Bill and approx two thirds opposing each of the proposed strands of reform. No explanation has been given for disregarding the majority view.

Who is this law for?
The GRA2004 was designed for a tiny minority of people who were diagnosed with gender dysphoria. By removing this defining feature of trans people the Bill opens up changing sex on a birth certificate to potentially 100% of the population. This is not ‘simplifying’ the process; it is removing the process.

What is International Best Practice?
The need to introduce self-id to comply with international best practice is often mentioned, citing the Yogyakarta Principles. However, only a handful of countries permit self-id and Prof Robert Wintemute, co-author of the Principles, gave written evidence to the Committee stating:

The Yogyakarta Principles do not represent “international best practice”. There is no legal obligation to comply with any part of the Principles that goes beyond the case law of the European Court of Human Rights, especially Principle 31 on abolishing the reference to a newborn child’s sex on her or his birth certificate.

Prof Wintemute now argues that the Principles should not be used to guide law-making and were written without considering the impact on women.

ECtHR case law that the requirement for a relevant diagnosis be provided in support of a gender recognition application was fair and balanced was upheld only last year in Northern Ireland.

Is the criminal penalty for a false declaration adequate?
No. The Cabinet Secretary gave evidence that there can be no prosecutions relating to after a GRC is issued. If a person changes their mind they can apply for another GRC and continue to do so multiple times.

The only point at which a criminal penalty can be considered is when a person signs a declaration that they have lived in the acquired gender for 3 months and intend to continue doing so. However, there is no definition or meaning attached to ‘acquired gender’ and with no requirement to change personal appearance, name or ID documents there can be no way to assess compliance. And how can mischievous intent at a historic point in time ever be proved? It would be analogous to trying to prosecute someone for not meaning their marriage vows.

How does the GRA interact with the Equality Act?
Legally unknown. Our judicial review on 9-10th November will consider the Scottish Government’s (SG) revised statutory guidance for the Gender Representation on Public Boards Act which added biological males who possess a GRC to the definition of “woman” in the Equality Act 2010 (EA2010). We maintain this is not compliant with the previous court decision that only the EA2010 can be used, provision for women by definition excludes biological males, and an order to strike the reference to GRCs from the guidance. SG claims a GRC changes a person’s sex for the purposes of the EA2010.

The outcome of this case is crucial for understanding the proper relationship between the GRA2004 and EA2010 and, without a ruling, MSPs will be voting blind on the impact of gender reforms. Our supplementary evidence explains that should the court find in favour of the SG then the reform Bill will result in the removal of EA2010 sex discrimination and equal pay rights as a woman, pregnancy and maternity rights, as well as Abortion Act 1967 rights for the rapidly growing number of young women who seek a GRC to be treated as a man, as these rights are only prescribed in law for women. Changing who is classed as a woman or a man in the EA2010 via GRA reform also risks Parliament straying into reserved matters.

Will GRA reform affect the operation of the Equality Act?
Outside ongoing legal arguments and in reality, yes. As revealed at our first judicial review it is SG policy that ‘transwomen are women’ on a self-id basis and this permeates virtually all single-sex spaces and services. SG school trans guidance overrides legislation mandating separate sex toilets and ignores the s195 safeguarding for girls sports contrary to assurances by the Cabinet Secretary that it is applied successfully. That women are not entitled to single-sex toilets or changing rooms was also erroneously asserted in Parliament.

The SG has simultaneously raised transwomen’s expectations of access and compelled service providers compliance via policy, funding conditions, and pressure from SG funded trans lobby groups. NHS boards have already worked out that s22 privacy provisions mean a female, rather than a transwoman, nurse cannot be guaranteed if requested by a patient and it is easier and less likely to lead to litigation to gaslight women (page 14) that an obvious man in the next bed is really a woman.

The situation is dire at the moment for women and is set to worsen as the Bill stands. An unknown increase in GRC-holders who are under no obligation to change appearance, and who will not even be eligible for NHS procedures to make physical changes as they do not have gender dysphoria, will lead to women unable to challenge men in women’s spaces due to pressure to assume they are trans GRC-holders. After all, men know better than women, or so we are once again being told.

How should gender-distressed children be treated?
Contrary to the majority Stage 1 report the Cass Review findings are relevant to Scotland. This is confirmed by the Chief Executive of NHS Greater Glasgow and Clyde who stated:

With regard to the development of services for young people, I can confirm that NHS Greater Glasgow and Clyde welcomes the publication of the interim report by Dr Hilary Cass in March 2022 regarding the review of gender services for children and young people in England. We view this as both timely and wholly relevant to informing the development of the future service model in Scotland.

Cass deemed the gender affirmation model for children, as practised by Sandyford in Glasgow, to be “unsafe”. Affirming a child as the opposite sex either socially, legally or medically is not a neutral act; it has significant effects in terms of psychological functioning and may cause great harm. The recently published draft interim service specification for England, reported in the Telegraph, moves away from affirmation and is more in line with other paediatric provision. Childhood dysphoria mostly resolves with maturity and doctors warn against using pronouns and new names. NHS Scotland is obliged to follow public health best practice and the current divergence in treatment from England is not sustainable in the long-term. State affirmation of under 18s by way of a GRC is in direct contradiction of the findings of Cass and MSPs should be careful not to allow ideological lobbying to override the best evidenced care of our children.