The Scotsman, 17 January 2023, Maren Smith gives her reaction on the blocking of the Gender Recognition Reform Bill by the UK Government

STV, 22 December 2022, Marion Calder on the passing of the Gender Recognition Reform Bill

BBC News, 21 December 2022, Susan Smith, coverage of demo at Parliament and the Bill

GB News, 09 October 2022, Should 16 year olds be allowed to change their gender? – featured our rally at Parliament

Talk TV, 17 August 2022, Susan Smith on the appointment of a man as the first Period Dignity Officer

BBC Reporting Scotland, 18 February 2022, report on our judicial review appeal win on the redefinition of ‘woman’ in the Gender Representation on Public Boards Act

BBC News at One, 17 February 2022, Marion Calder on reform of the Gender Recognition Act

Talk Radio, 12 June 2021, Susan Smith talking about the petition to accurately record the sex of people charged or convicted of rape or attempted rape

Feminist Current talks to Susan Smith about the passing of the Gender Recognition Reform Bill, 02 January 2023

The Implications of Self-ID in Scotland’s Schools and Prisons – Maren Smith and Rhona Hotchkiss, 06 December 2021

The Telegraph, 01 February 2023, “SNP minister accused of ‘throwing petrol onto the fire’ after publicising attempt to disrupt women’s rally”

Daily Mail, 29 January 2023, “EXCLUSIVE: Patient claims she was sexually assaulted and threatened with rape during stays at two Scottish hospitals – and accuses NHS of ‘culture of cover up’ over horrific ordeals”

Daily Mail, 25 January 2023, “Transgender double rapist sent to a women’s prison ‘is a man who has committed rape’: SNP Joanna Cherry leads fury as campaigners warn sexual predator ‘should not be called a woman’ and use the hashtag ‘#Notourcrimes'”

The Telegraph, 24 January 2023, “Transgender woman found guilty of two rapes when a man”

The Telegraph, 21 January 2023, “Why teenage girls are on the front line of the trans war”

The Times, 18 January 2023, “Gender bill lobbyists get millions from SNP”

The Times, 15 December 2022, “Film screening called off after trans protest”

The Telegraph, 13 December 2022, “Scottish judge rules human sex is ‘not limited to biology’”

Scottish Daily Expresss, 01 December 2022, “Event attended by Nicola Sturgeon in free speech row as women alleged to have been turned away”

The Telegraph, 29 November 2022, “Nicola Sturgeon heckled with ‘shame on you’ during male violence speech”

Scottish Daily Express, 19 November 2022, “Anger over Glasgow drag event open to teenagers under the age of 16”

The Telegraph, 10 November 2022, “Human sex is not determined at birth and can legally change, SNP argues in court”

The Guardian, 10 November 2022, “EHRC has not taken sides in debate on impact of transgender laws, Scottish court told”

The Guardian, 09 November 2022, “Scottish plans to include transgender women in equality law tested in court”

BBC News, 09 November 2022, “Scottish government back in court over definition of ‘woman'” 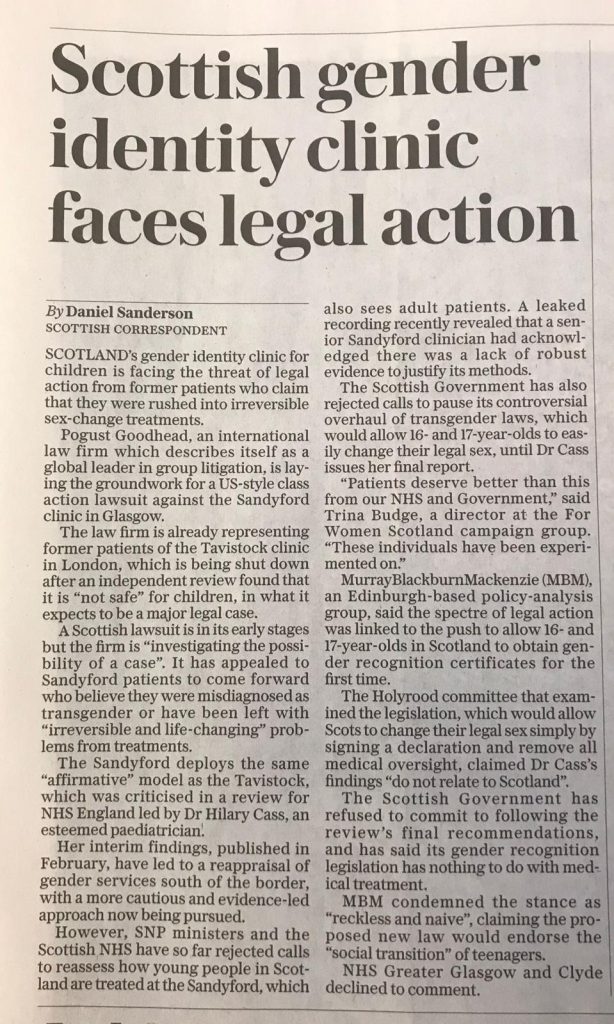 The Times, 05 November 2022, “Gender recognition reform: SNP rebels force Sturgeon to back off”

The Telegraph, 03 November 2022, “Nicola Sturgeon under pressure to shut down Scotland’s only gender clinic for children”

Daily Mail, 01 November 2022, “Puberty blockers given to children ‘as young as NINE’ at Scotland’s Tavistock Centre: Sandyford clinic under fire for giving life-changing drugs to autistic and troubled youngsters who may have been ‘misdiagnosed’ as trans” 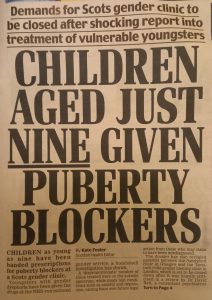 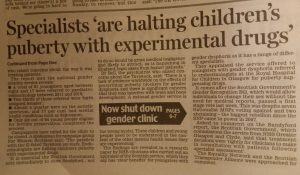 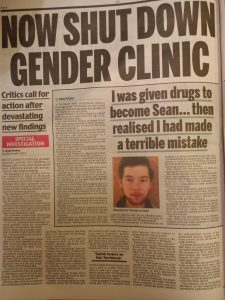 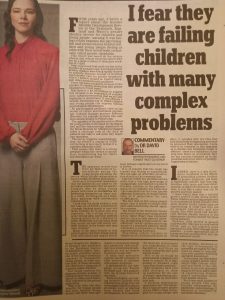 Scottish Daily Express, 24 October 2022, “Keir Starmer refuses to say if Eddie Izzard will be allowed to stand as female candidate”

The Telegraph, 14 October 2022, “NHS Scotland accused of failing to safeguard children by referring them to Mermaids”

Daily Record, 09 October 2022, “SNP equalities officer threatened to ‘beat the f*** out of terfs and transphobes’ in abusive tweets” 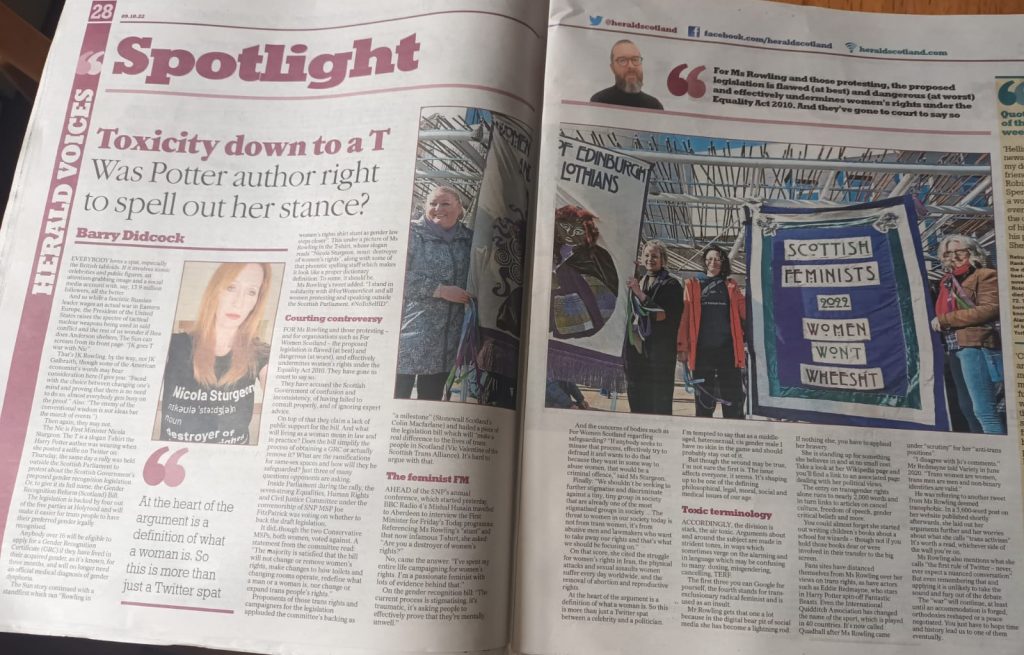 Multiple media articles on 6th October relating to our women’s rights rally at the Scottish Parliament: see here for the list of press and TV coverage.

The Telegraph, 24 September 2022, “Scottish tour guides told to address visitors as ‘grown-ups’ instead of ‘mum and dad’”

Daily Mail, 17 August 2022, “Meet the (very macho) weightlifting, boxing, ultra-marathon-running new ‘period officer’ who SNP-led Dundee council has given £36,126-a-year to talk about periods and the menopause with women and girls”

The Scotsman, 17 August 2022, Letter: “Not so fast” (in response to Scottish Trans column) 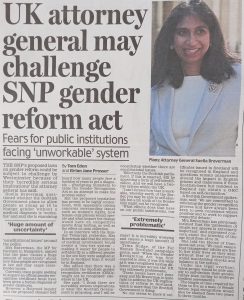 The Telegraph, 30 June 2022, “‘Farts’ – How women who question transgender ideology are described in Scottish Government training”

The Telegraph, 13 June 2022, “Scots should be allowed to change gender ‘as many times as they like’”

The Times, 15 May 2022, “Trans alliance fears right to object could lead to court cases”

The Times, 08 May 2022, “Trans status of recruits ‘must be disclosed to employers’

The Telegraph, 02 May 2022, “Defining what a woman is would harm trans people, says Nicola Sturgeon” 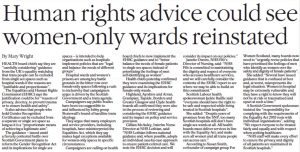 The Times, 10 April 2022, “Transgender girls should not be barred from sport, says SNP” 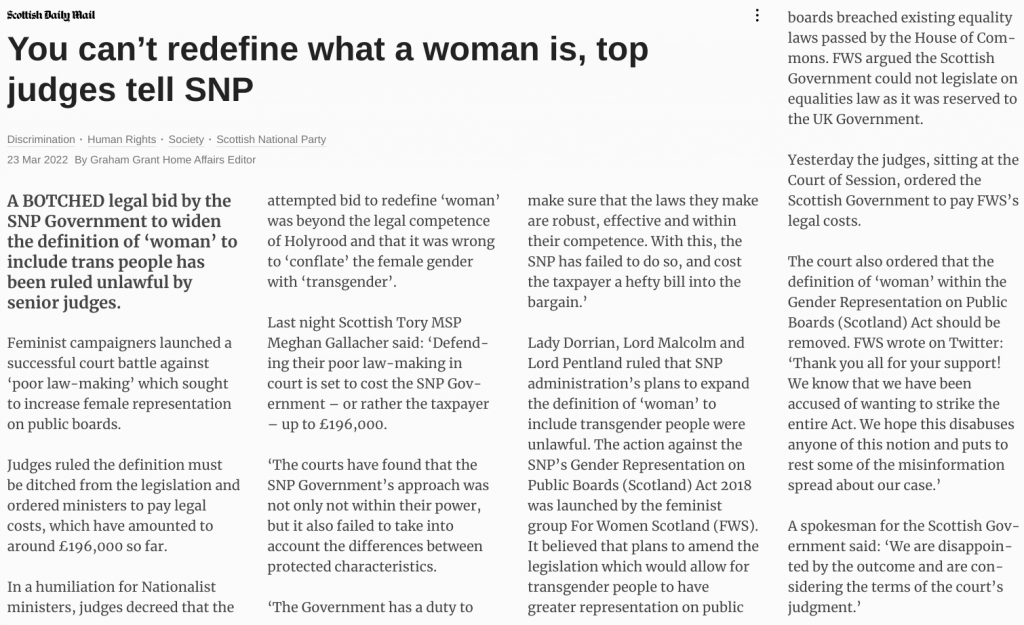 The Telegraph, 06 March 2022, “Scotland to be one of the easiest places on Earth for teenagers to change gender”

The Times, 06 March 2022, “Self-ID law ‘not supported by all trans people’ says campaigner”

Scottish Daily Express, 28 February 2022, “Women’s group calls on Scots to troll the Nats by filling out a paper version of the census”

The Times, 19 February 2022, “Feminists says fight will go on after court win over definition of ‘woman’”

The Times, 19 February 2022, “Ministers lose bid to redefine ‘woman’ for the boardroom”

The Telegraph, 18 February 2022, “SNP loses bid to ‘redefine meaning of women’ to include trans people on public boards”

The Times, 13 February 2022, “SNP ready to make concessions on gender reforms ahead of May elections”

The Times, 23 January 2022, “Ministers rapped over census and women’s rights”

The Times, 09 January 2022, “Sex education: the Scottish students who sell their bodies”

Daily Record, 22 December 2021, “‘Men and women’ could be ditched from Scots courts as lawyers urged to use gender-neutral terms”

The Times, 20 December 2021, “Gender reforms will cost you, SNP and Greens told” 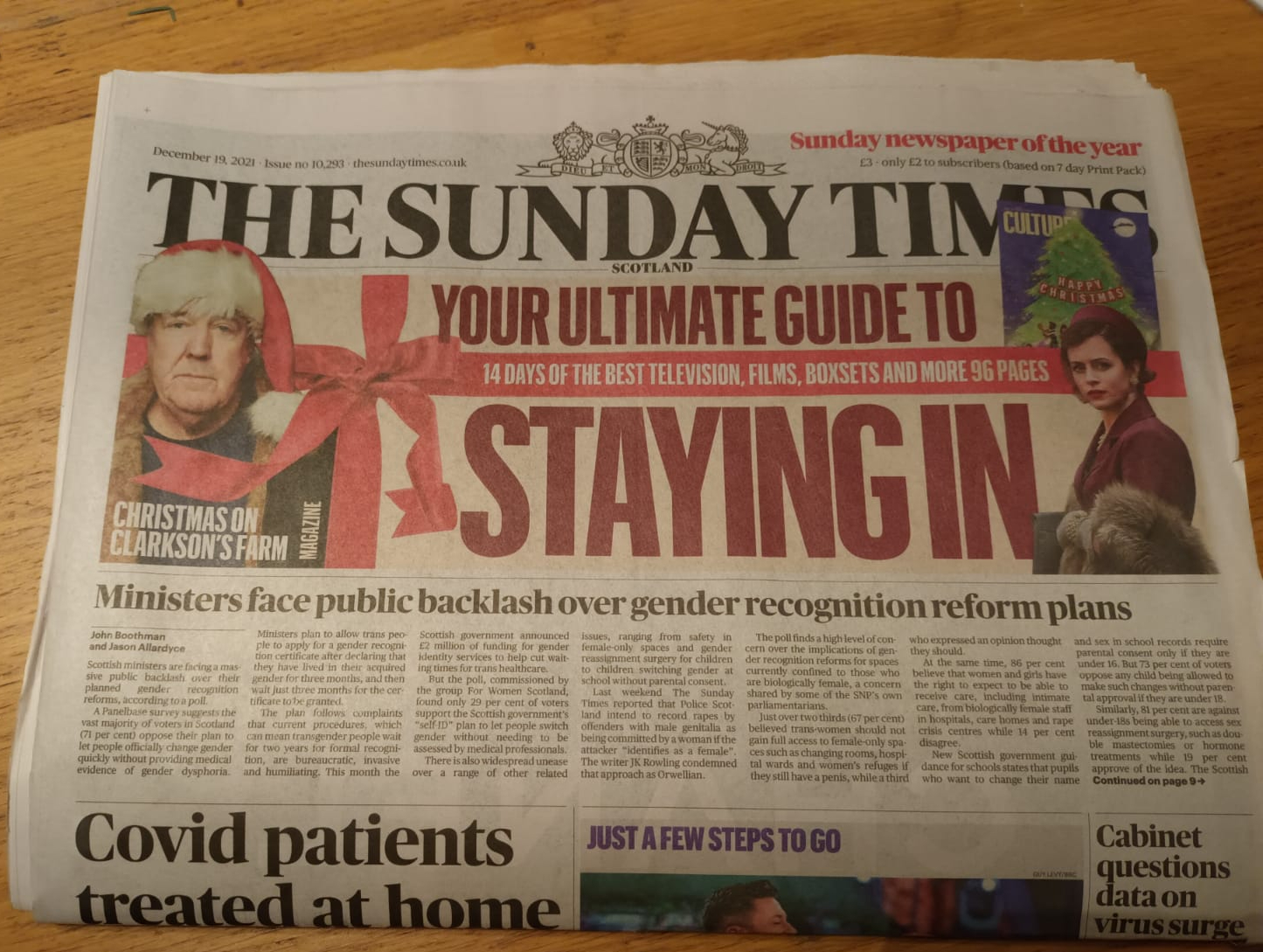 The Herald, 09 December 2021, “Stuart Waiton: It’s up to parents to raise their children – not politicians” 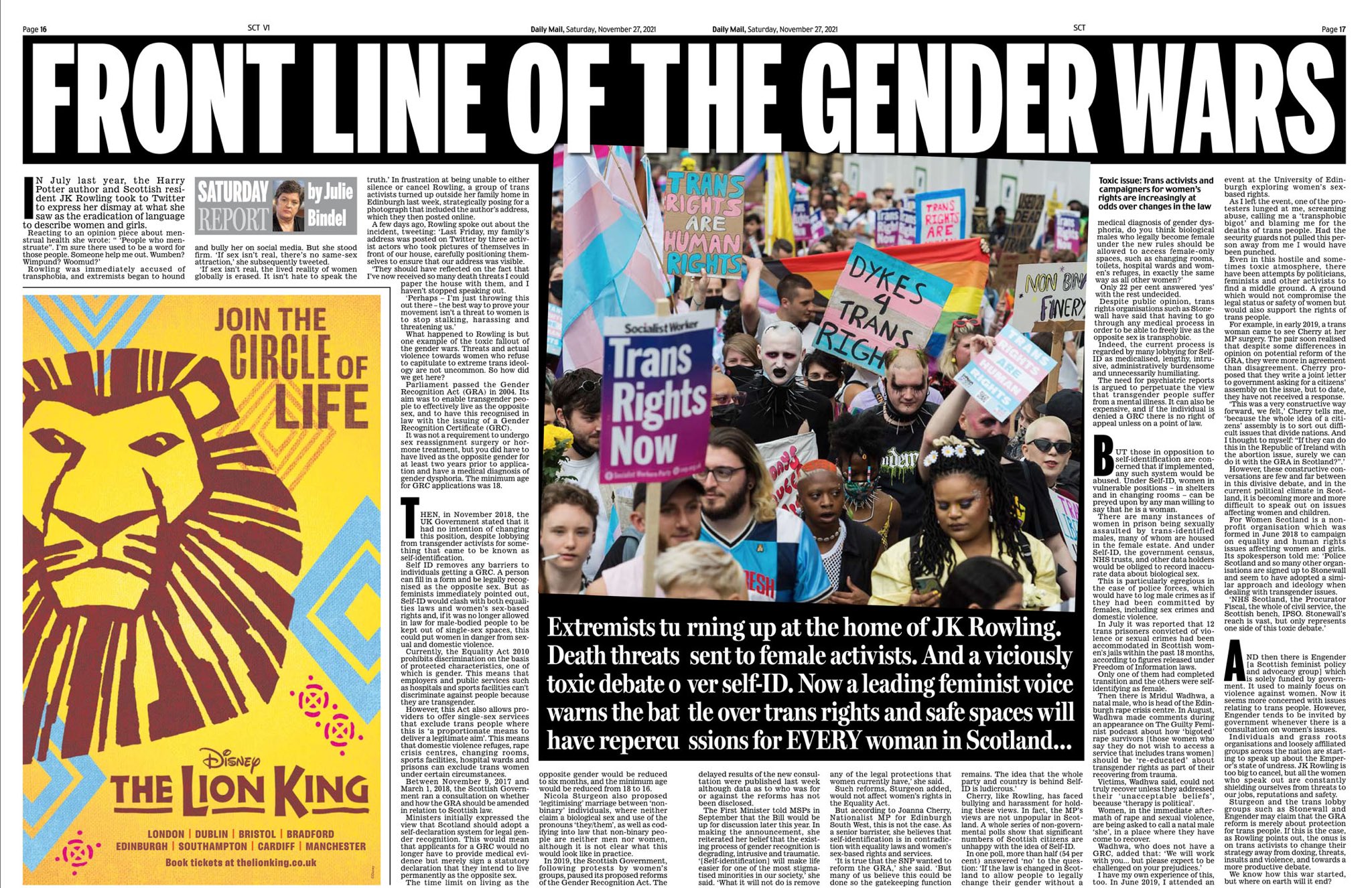 The Herald, 26 November 2021, “Start of SNP conference hit by row over transgender rights”

The Telegraph, 12 November 2021, “Tampons in men’s lavatories in case they are needed by transgender civil servants” 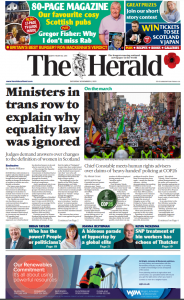 The Herald, 04 November 2021, “Ministers defend claims they acted unlawfully by changing the definition of ‘woman'”

The Herald, 03 November 2021, “Scots ministers accused of unlawfully changing the definition of ‘women’ in court challenge” 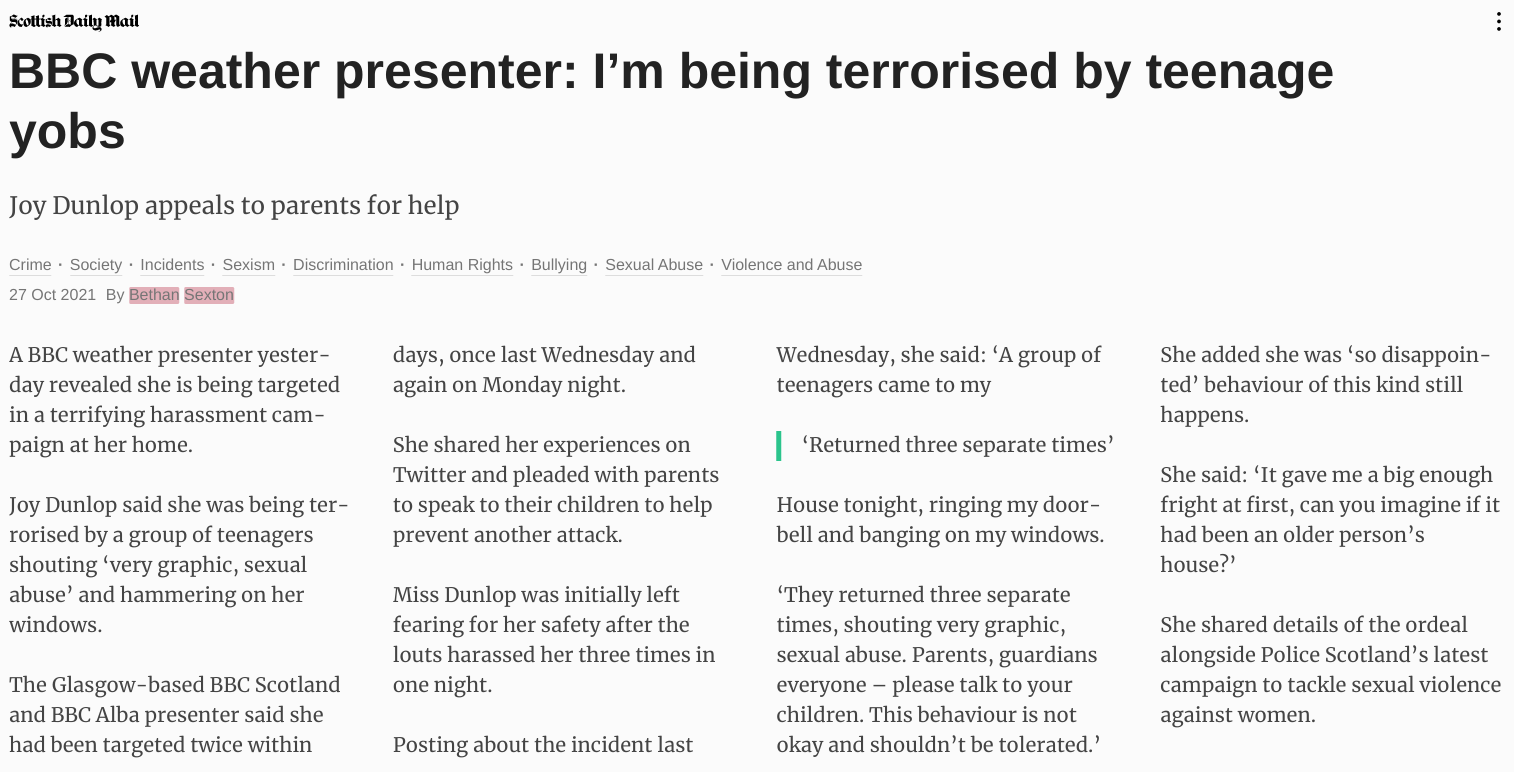 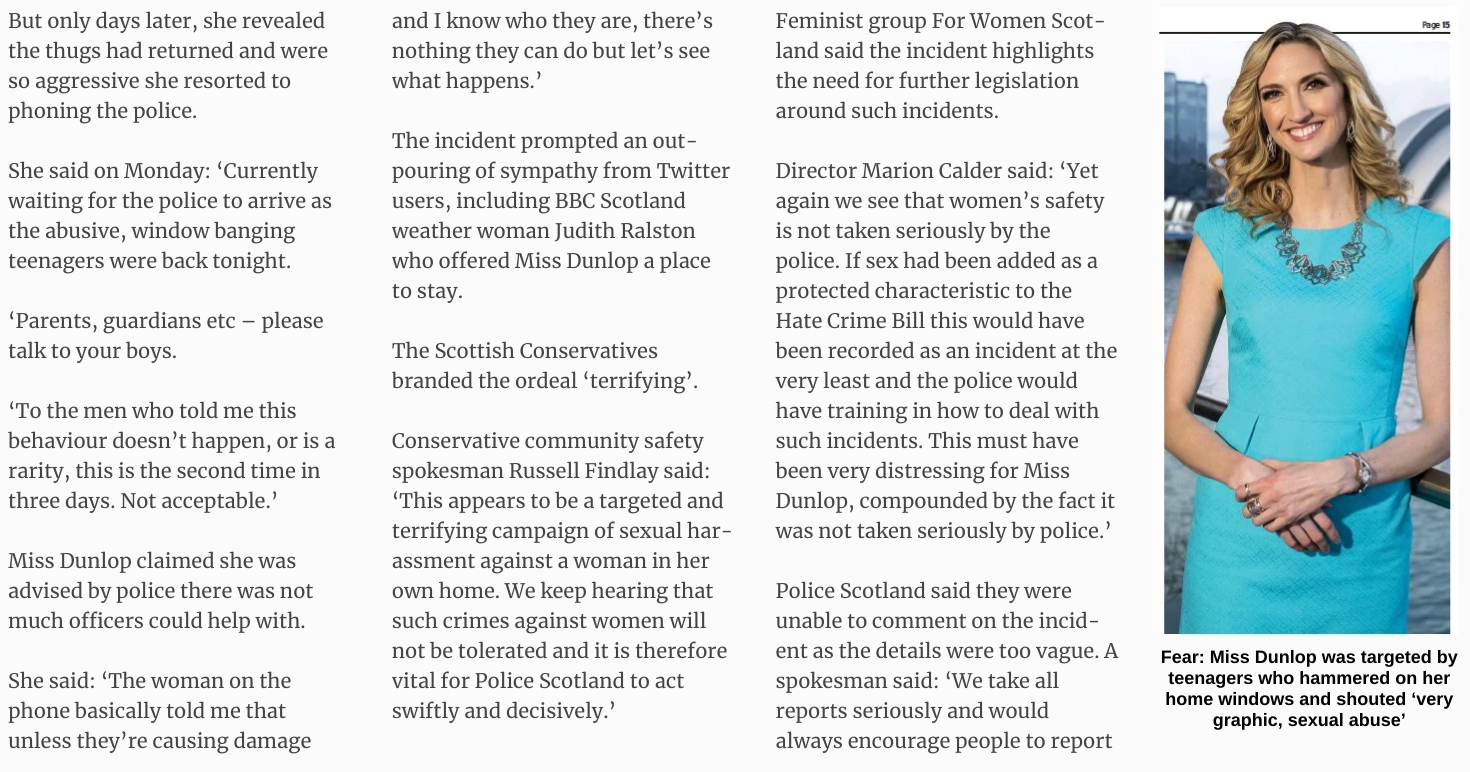 The Herald, 11 October 2021, “SNP ministers criticised for urging ‘anyone with a cervix’ to get a smear test”

The Times, 25 August 2021, “Tiger Who Came to Tea ‘teaches boys violence and sexism for life’”

The Times, 23 August 2021, “Activist charged with transphobia kicked out of pub by bartender”

Daily Mail, 12 August 2021, “Scotland will let pupils change gender aged FOUR without their parents’ consent under guidance for teachers that says ‘recognition and development of gender identity can occur at a young age’”

The Telegraph, 12 August 2021, “Scottish four-year-olds can change gender at school without parents’ consent”

Daily Mail, 27 July 2021, “Scottish government wants its 8,000 civil servants to add pronouns to their email sign offs despite nearly 60 per cent saying they are against the move”

The Telegraph, 27 July 2021, “Civil servants to be asked to include pronouns in email sign-offs” 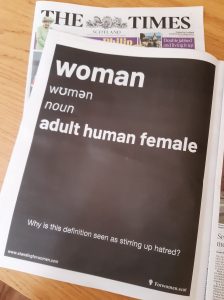 The Sun, 15 July 2021, “Over half of Scottish Government workers snub push to use gender pronouns in emails”

John O’Groat Journal, 01 July 2021, “Drawing a line in the sand at Reiss beach for women’s rights”

The Courier, 23 May 2021, “Fife police  people to report ‘hate crime’ stickers – then say they are not illegal”

The Times, 23 May 2021, “Warnings that organisations’ policy could breach laws on trans rights”

The Spectator, 08 May 2021, “Will a more female Holyrood make a difference to women’s lives?”

The Times, 24 March 2021, “Definition of woman will include trans people to increase equality” 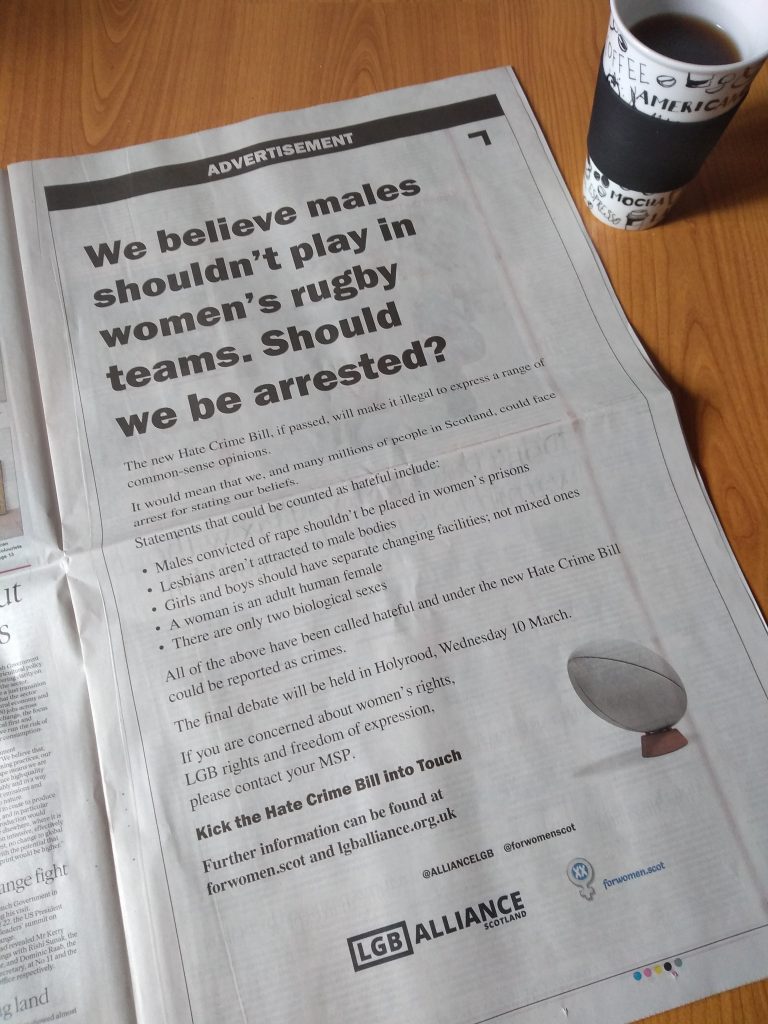 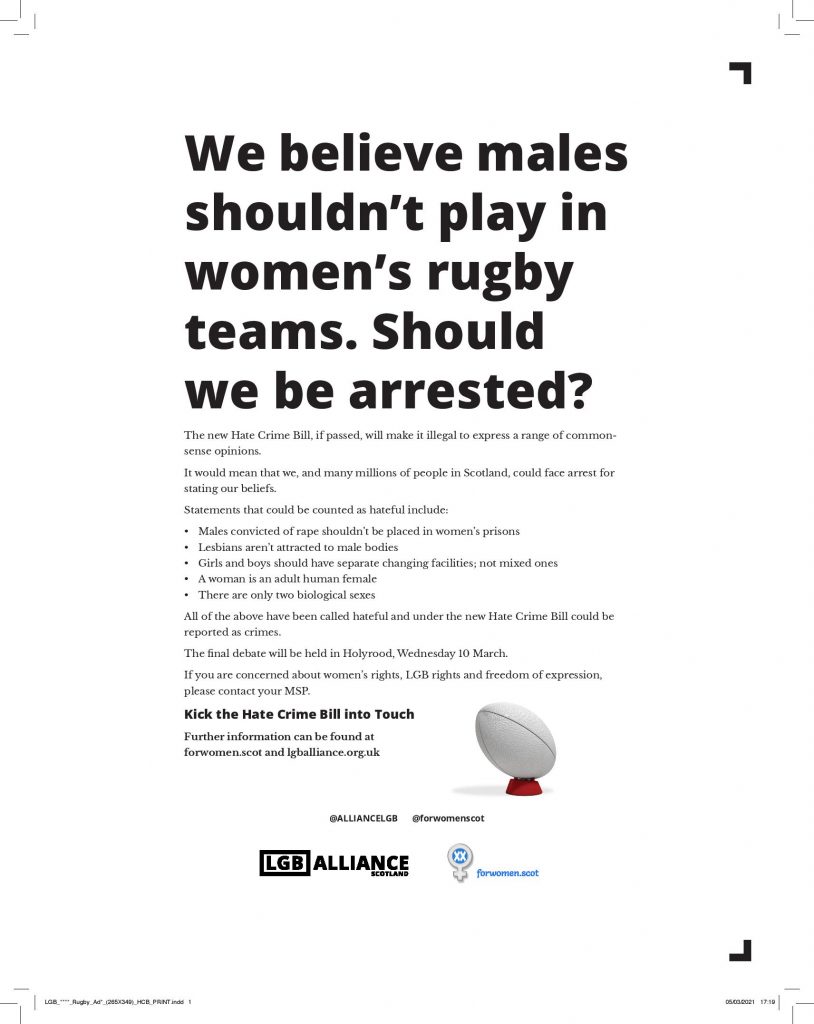 The Scotsman, 07 January 2021, “Scottish Government can ‘ride roughshod’ over equalities law in row over definition of women in new Act”

The Critic, 14 December 2020, “Women in Scotland risk having their right virtue-signalled away”

Daily Record, 06 December 2020, “Campaigners in plea for ban on Scots kids being given puberty blockers after landmark ruling”

The Herald, 07 November 2020, “Agenda: New bill must not conflate sex and gender” by Trina Budge, FWS

The National, 27 October 2020, “It is reckless to say that puberty-blocking drugs are safe and reversible”
(Letter in response to “The election of a trans woman for the SNP would be a huge victory”)

The Scotsman, 16 October 2020, “Definition of a woman: Why feminist group For Women Scotland is asking Court of Session to intervene in row over gender recognition”

Sunday Mail, 06 September 2020, “Our women are living in fear of trans attacks” 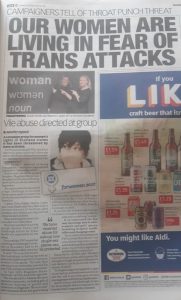 The Spectator, 31 July 2020, “Is Scotland changing the law on gender by stealth?”

The Scotsman, 31 July 2020, “Feminism is not ‘right-wing’ and the word ‘woman’ is not discriminatory” 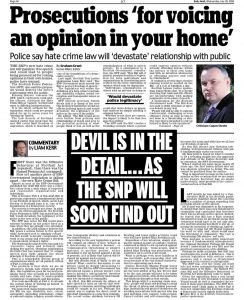 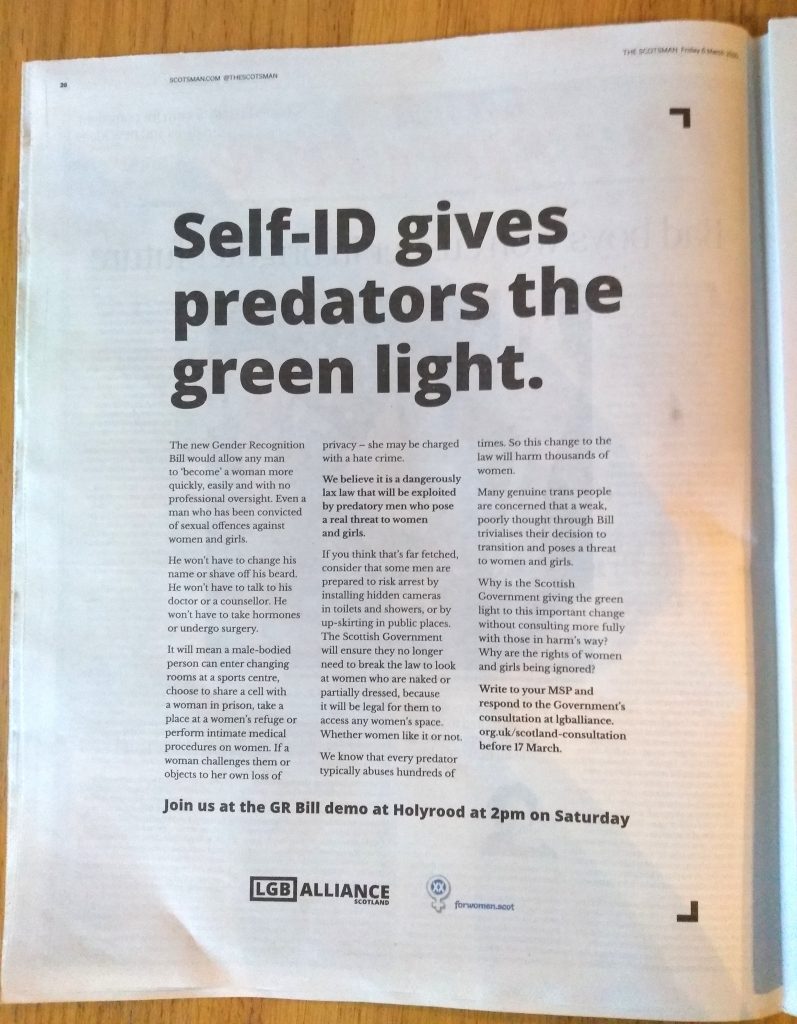 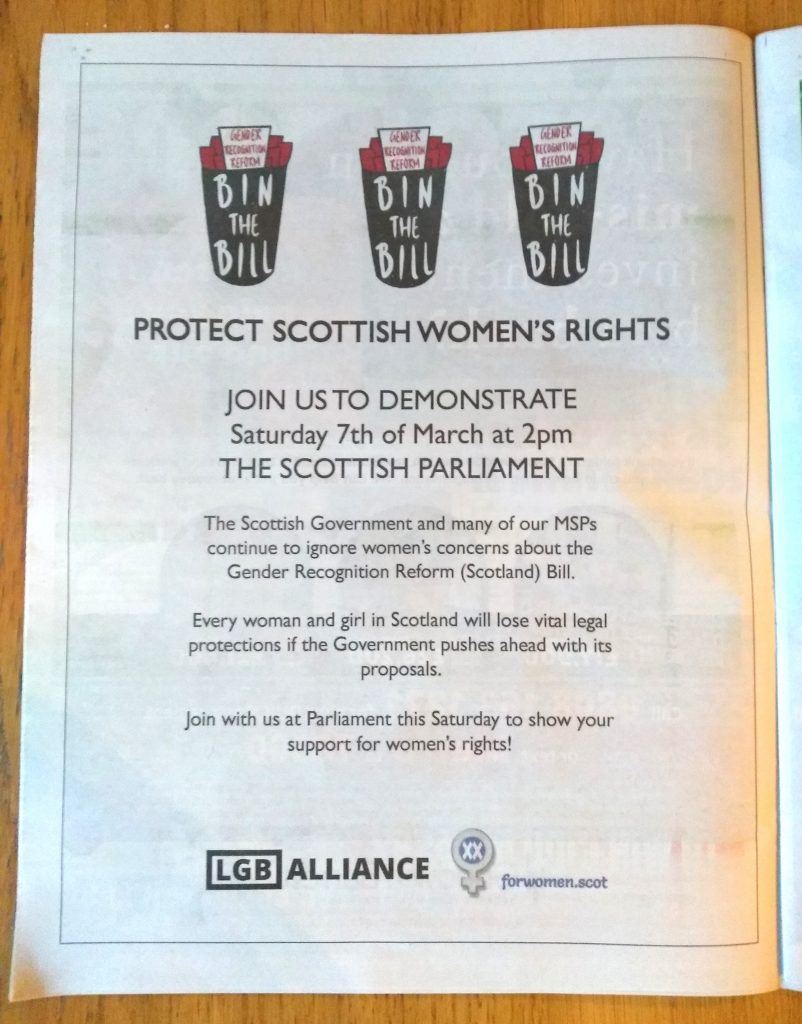 The Spectator, 29 February 2020, “Are women’s libraries still a safe space for women?” 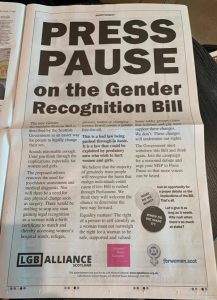 rt.com, 06 January 2020, “UK High Court to rule if clinic can carry out gender reassignment on children as concerns over methods mount”

The Times, 18 December 2019, “‘No evidence’ that men are using trans identity for sexual violence”

The Herald, 30 September 2019, “Let us have a measured debate on the issue of transgender rights”
(Letter in response to “We must fight against the rolling back of trans rights”)

The National, 26 September, 2019, “Data experts ‘left out’ of discussions on GRA census questions” 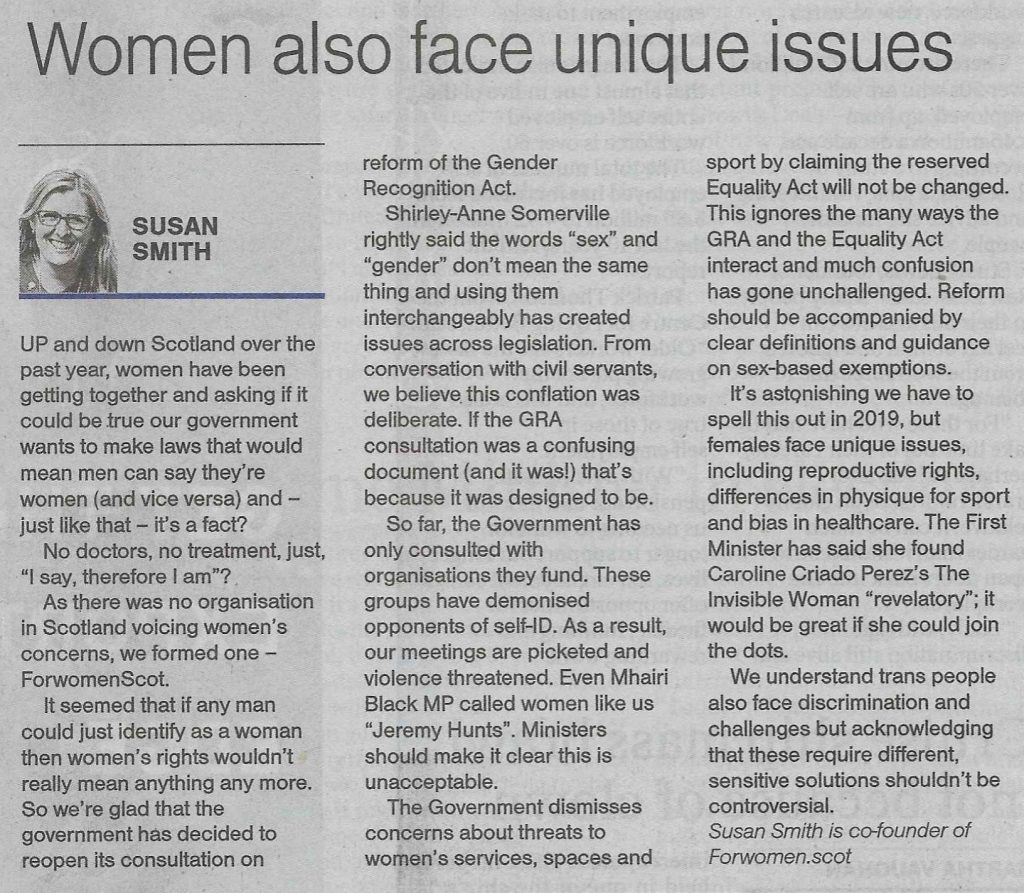 The Scotsman, 23 June 2019, “Patrick Harvie accused of smear over claim parliament was ‘platform for transphobic hatred'”

The Herald, 09 June 2019, “Abuse goes both ways”
(Letter in response to “Trans Scots suffering abuse in wake of GRA debate”)

The Scotsman, 19 May 2019, “Canadian feminist Meghan Murphy ‘won’t be silenced’ in Scotland”

The Scotsman, 09 May 2019. Letter in response to Vic Valentine’s opinion piece:

The Times, 04 May 2019, “‘Transphobic’ blogger Meghan Murphy invited to Holyrood”

The Times, 21 March 2019, “Transgender singer cancels gig after calling for feminists to be punched”

National Review, 07 February 2019, “This Week at the U.N.: Feminist Concern about Transgenderism is ‘Misplaced'”

The Times, 07 February 2019, “‘Non-binary’ sex option will not appear on the next census 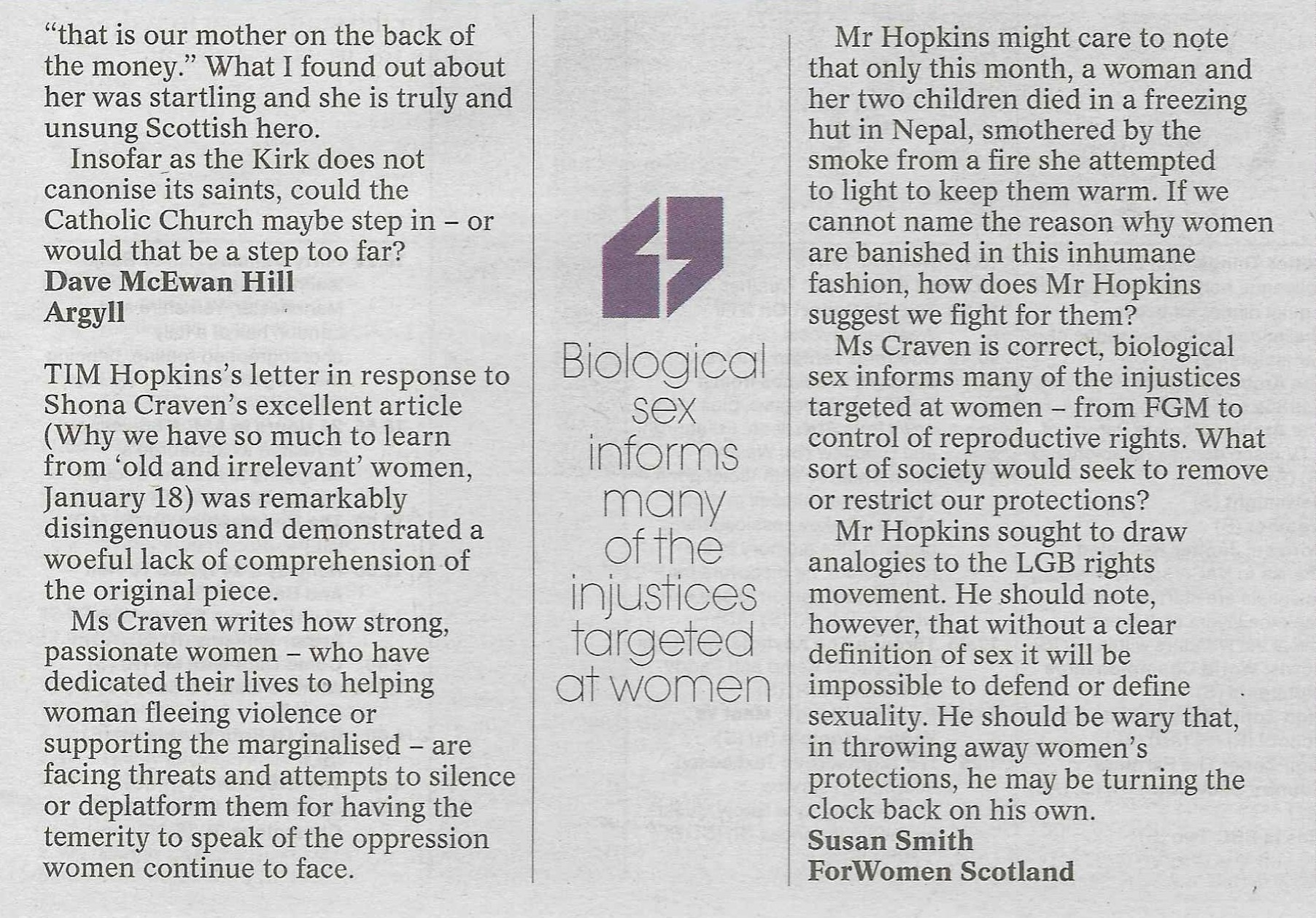 The Times, 04 December 2018, “Feminists fight against gender choice in census” 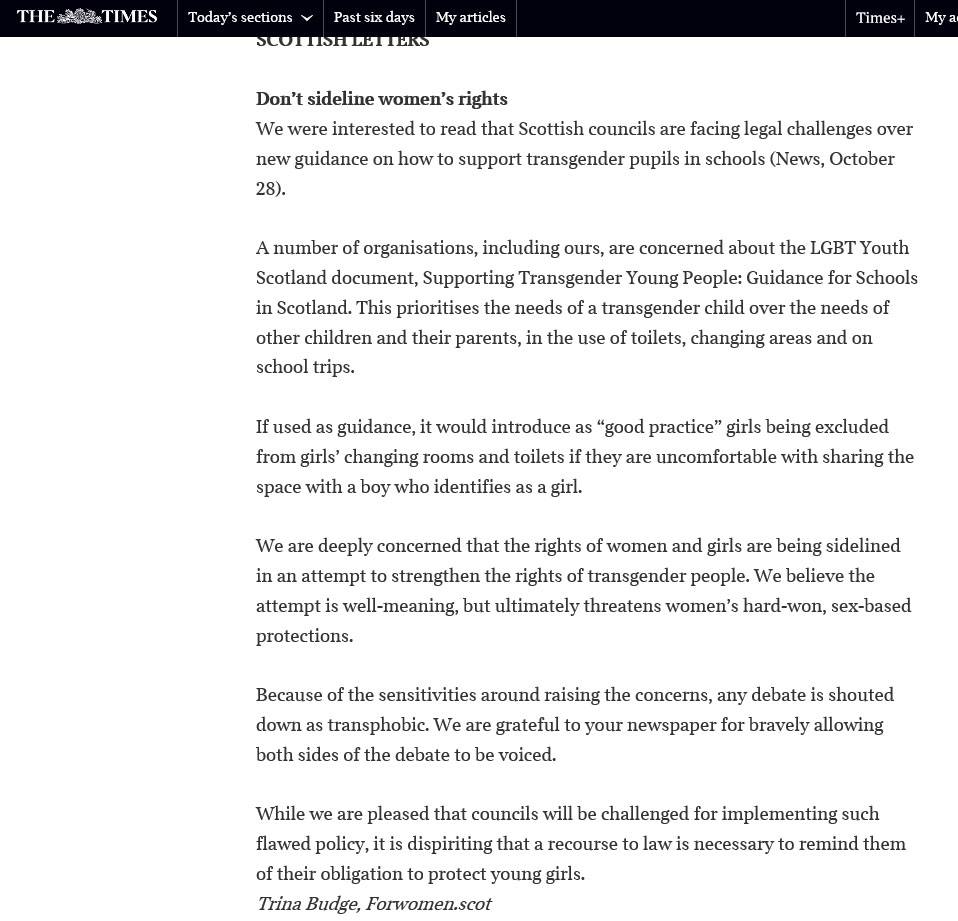 The Herald on Sunday, 28 October 2018 (in response to Iain Macwhirter’s article): 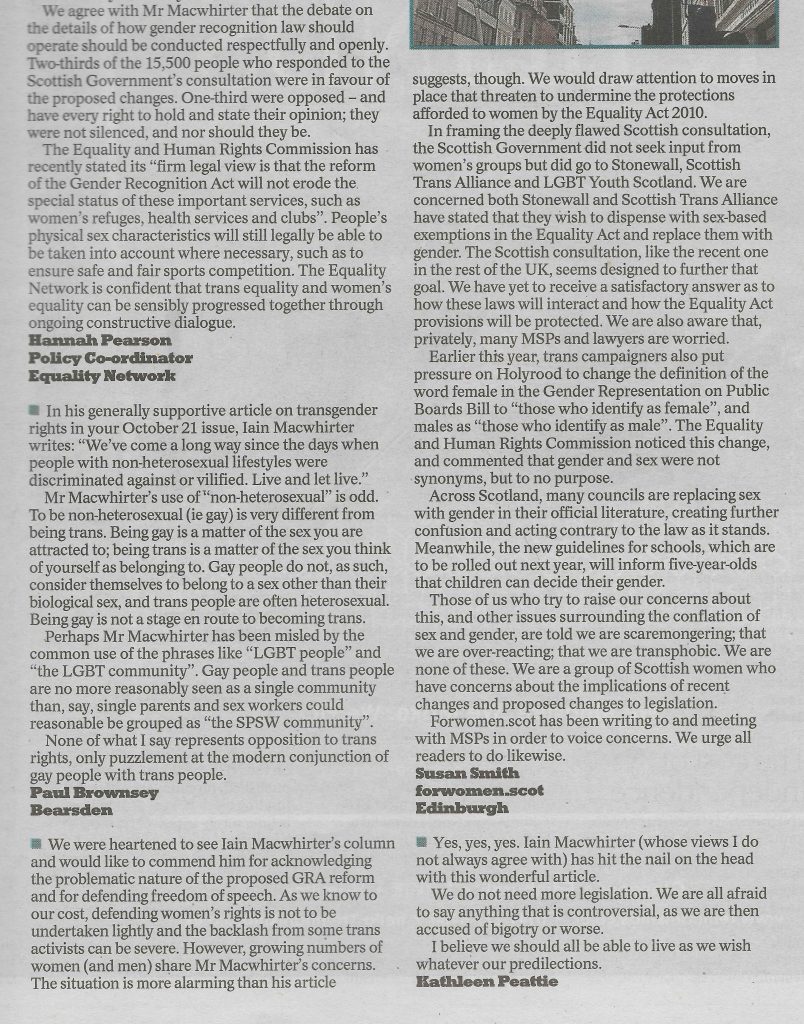 Christian Post, 06 August 2018, “Scotland Schools to Instruct 5-Year-Olds: Your Gender is ‘What You Decide’ It to Be”

Inverness Courier, 26 June 2018, “Woman Identified as Man to get into Hostel Dorm”

Press and Journal, 22 June 2018, “Woman gets Key to Highland Hostel Dorm after Self-Identifying as a Man”