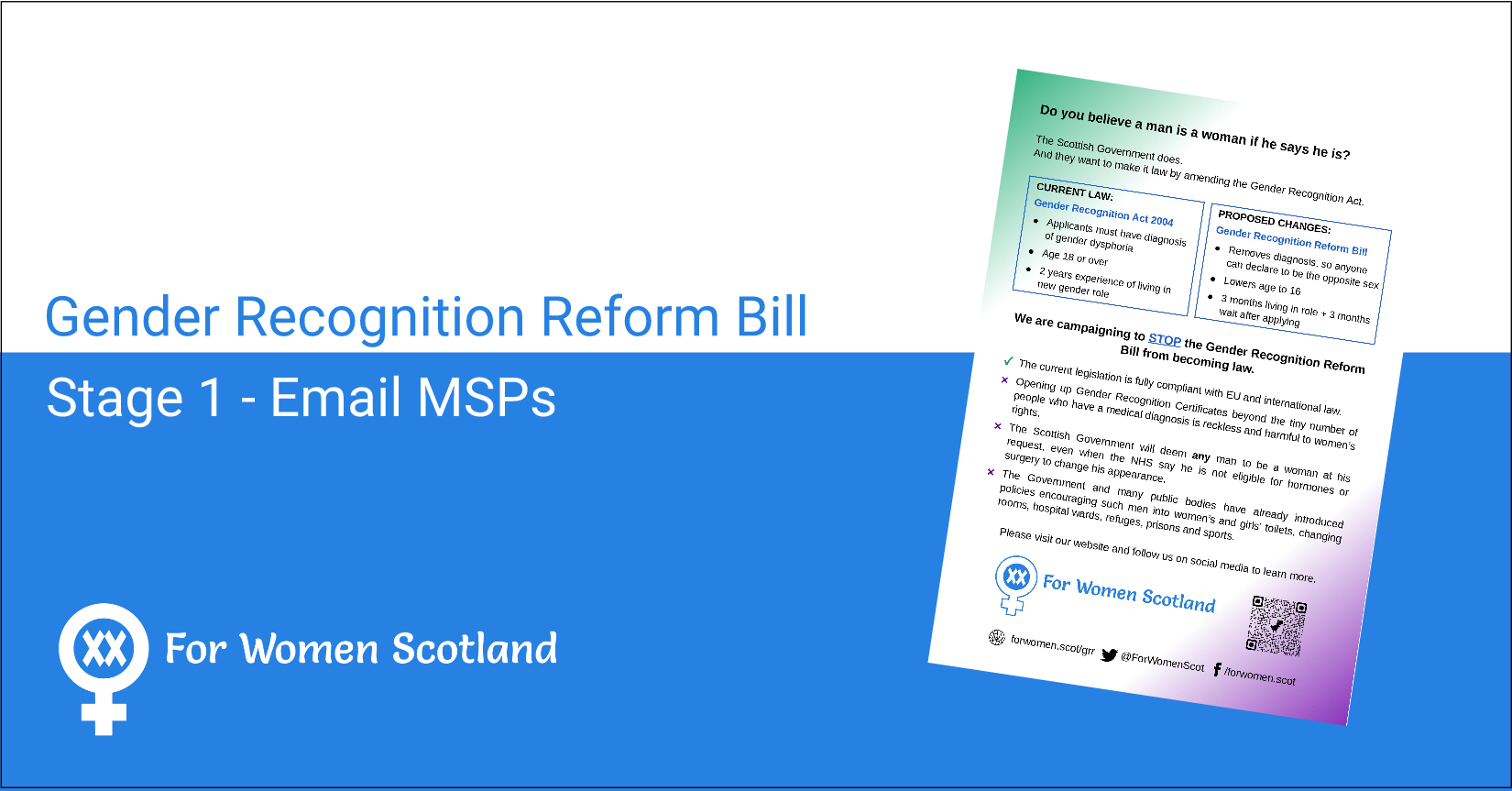 The Gender Recognition Reform Bill is currently being considered by the Scottish Parliament with the Stage 1 debate scheduled for 27th October. It is our view that the Government’s development and understanding of the Bill is flawed, evidence from women’s groups has not been given sufficient, if any, consideration and if it passes into law the impact felt by women and children will be devastating.

This Bill is five years in the making and yet the significant issues raised by women have not been addressed or resolved; they have simply been ignored. MurrayBlackburnMackenzie’s recent submission to the EHRCJ Committee covers many of the issues and problems still outstanding and they have 14 questions which remain unanswered. We have concentrated on four questions which we hope everyone will ask all their MSPs.

The engagement of MSPs with constituents so far has been very disappointing with many politicians woefully misinformed about the proposed law change.

With only a few weeks to go until the Stage 1 debate this is no longer acceptable. There can be no excuse for any MSP not to be up-to-speed on the intricacies of the Bill and all must be willing and able to discuss the legislation in full with constituents. Ask them a question that so far the Government has been unable to answer. If your MSPs can’t answer, then they have no business voting the Bill through to the next stage.

Please pick one, or more, of the questions from our leaflet and ask your EIGHT MSPs for an answer. Please keep your emails fairly brief and to the point. Suggested text is given below.

You can email your constituency MSP and seven regional MSPs by putting in your postcode at writetothem.com.

*** WriteToThem may block emails with copy and paste text so please consider taking a little more time to put your postcode into the Scottish Parliament’s site to find your eight MSPs and then copy their email addresses into your own email to send with the text of your choosing. ***

If your MSPs cannot answer your question promptly and to your satisfaction, ask them to VOTE AGAINST the Gender Recognition Bill on 27th October.

We’ve put together some text to make it easier for you to email your MSPs, but feel free to put it in your own words if you prefer.

Could you please explain your understanding of the interaction between the protected characteristic of sex in the Equality Act and recognition of gender as I cannot see how MSPs can be confident of the legal effect of GRCs, or the consequences of the proposed reform, until this matter is addressed, in part by the current judicial review brought by For Women Scotland? Please read their letter to the EHRCJ Committee about its impact on the Bill. The Committee’s Stage 1 Report failed to address this fundamental point. Are you comfortable voting for the principle of self-identification of sex in such uncertain circumstances and do you realise that if it is ruled that a person’s sex does change for the purposes of the Equality Act then the GRR Bill will have the effect of removing any recourse to the law for sex discrimination, equal pay claims or maternity rights for the growing number of young women who seek a GRC?

The Scottish Ministers are inconsistent on both the definition of “woman” and the operation of the Equality Act and, as one of your constituents, I would appreciate if you would vote against the Bill moving to Stage 2 until such time as clarity is provided in these matters and we can be sure that women’s rights will be protected.

When introducing the Bill to Parliament the Cabinet Secretary, Shona Robison, said she strongly supported the single-sex exceptions in the Equality Act and then immediately, and incorrectly, said there was no entitlement to women-only toilets or changing rooms. This is typical of the Government’s misunderstanding of the application of the Equality Act and when women’s spaces and services are not protected at the moment it seems obvious the situation will worsen when GRA reforms will lead to an estimated tenfold increase in the number of GRC holders.

Can you please explain how an elderly woman can have her request met for a female carer to help with washing and dressing when service providers such as the NHS say there is no way to guarantee it due to the privacy provisions in section 22 of the GRA? How do we stop more women from self-excluding from essential services such as rape counselling due to Government policies permitting males access to the groups or staff roles? Do you agree with the recommendations of the Scottish Women’s Convention report for women-only spaces?

How do you think women’s right to single-sex spaces can be protected in light of reforms which will allow men who do not have gender dysphoria to gain a GRC with the expectation of access to women’s spaces, even if the NHS say he is not eligible for procedures to modify his body, or if he chooses not to change his name or ID documents?

The Scottish Government have a poor record on the single-sex exceptions in the Equality Act as have so far disregarded women’s concerns or requests to modify the Bill. I would appreciate if you would vote against the Bill moving to Stage 2 until such time as clarity is provided in these matters and we can be sure that women’s rights will be protected.

There are a number of issues which have yet to be resolved on how the new Gender Recognition Certificates will work throughout the UK. Can you please clarify:

Are you confident in voting for the Bill to go through to the next stage when the Scottish Government has not resolved these issues and the new Prime Minister reportedly has no intention of seeking any solutions, and is looking to prevent the Bill passing into law?

It seems very unwise to pursue a Bill with such fundamental problems and which will inevitably result in taxpayer funded Supreme Court actions and I would appreciate if you would vote against the Bill moving to Stage 2 until such time as clarity is provided in these matters.

Our Government’s proposals to amend the Gender Recognition Act by removing the requirement for a medical diagnosis of gender dysphoria is deeply concerning and not supported by the public, as shown in recent polls and by the responses to the EHRCJ Committee’s consultation.

I am particularly concerned about the interaction between social and medical affirmation of children who are gender-distressed and the proposed permanent legal affirmation from the age of 16, which is still the age of a child under the UN Convention on Rights of the Child. For families who are following best therapeutic practice it hampers the exploration of other possibilities and interferes with parental guidance. The interim Cass Report has already uncovered significant issues with the medical affirmation pathway (as practiced in Scotland), deeming it “unsafe” for young people, which the Government has failed to take on board. Do you agree with the Equality and Human Rights Commission that it would be wise to hold off on gender recognition reform until such time as the Cass Review makes its recommendations on the best way to treat gender distressed children? Did you attend the MSPs meeting with Dr Cass and do you agree with her concerns?

Government guidance and the influence of trans groups in schools has embedded the unscientific theory that we all have a “gender identity” and that children can choose their sex. It is highly likely that the ensuing increase in children supported at school to bind their breasts and change names/pronouns has also contributed to the long waiting list of young people seeking puberty blockers, opposite sex hormones, and breast removal that has overwhelmed the NHS.

The situation is currently unfolding as a serious medical scandal and the growing number of detranstioners indicates a problem with the rush to affirm children as trans. I would appreciate if you would vote against the Bill moving to Stage 2 until such time as clarity is provided in these matters by the Cass Report and we can be sure that we are doing the best for gender-distressed children and their families.

Thank you! Please let us know at info@forwomen.scot if you get any interesting replies from your MSPs.

Questions to ask with a bit more detail: