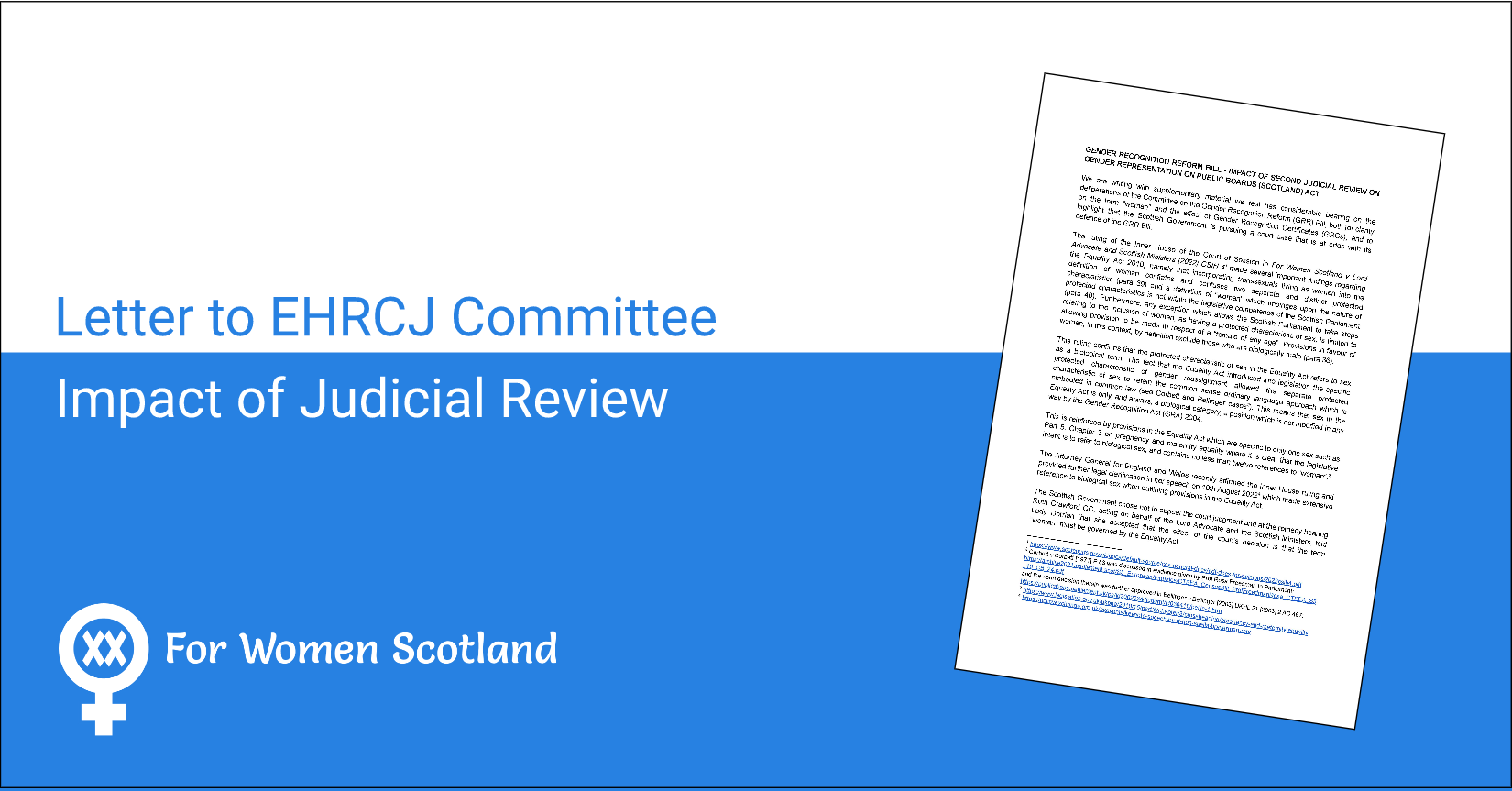 This is the first of two letters we sent to the Equalities, Human Rights and Civil Justice Committee on 30 August 2022. The second one on comments made by the Cabinet Secretary about the Equality Act single-sex exceptions is here.

We are writing with supplementary material we feel has considerable bearing on the deliberations of the Committee on the Gender Recognition Reform (GRR) Bill, both for clarity on the term “woman” and the effect of Gender Recognition Certificates (GRCs), and to highlight that the Scottish Government is pursuing a court case that is at odds with its defence of the GRR Bill.

The ruling of the Inner House of the Court of Session in For Women Scotland v Lord Advocate and Scottish Ministers (2022) CSIH 4 made several important findings regarding the Equality Act 2010, namely that incorporating transsexuals living as women into the definition of woman conflates and confuses two separate and distinct protected characteristics (para 39) and a definition of “woman” which impinges upon the nature of protected characteristics is not within the legislative competence of the Scottish Parliament (para 40). Furthermore, any exception which allows the Scottish Parliament to take steps relating to the inclusion of women, as having a protected characteristic of sex, is limited to allowing provision to be made in respect of a “female of any age”. Provisions in favour of women, in this context, by definition exclude those who are biologically male (para 36).

This is reinforced by provisions in the Equality Act which are specific to only one sex such as Part 5, Chapter 3 on pregnancy and maternity equality where it is clear that the legislative intent is to refer to biological sex, and contains no less than twelve references to “woman”.

The Attorney General for England and Wales recently affirmed the Inner House ruling and provided further legal clarification in her speech on 10th August 2022 which made extensive reference to biological sex when outlining provisions in the Equality Act.

The Scottish Government chose not to appeal the court judgment and at the remedy hearing Ruth Crawford QC, acting on behalf of the Lord Advocate and the Scottish Ministers, told Lady Dorrian that she accepted that the effect of the court’s decision is that the term “woman” must be governed by the Equality Act.

We are at a loss, then, why the Scottish Government revised the statutory guidance for the Gender Representation on Public Boards Act to include an addition to the Equality Act’s definition of woman:

“The meaning of “woman” for the purposes of the Act

We have a petition for judicial review pending, averring that this revised guidance is not compliant with the court’s decision and is therefore unlawful. The Scottish Government has repeated its earlier error in law by incorporating transsexuals living as women (albeit now restricted to those who hold a GRC) into the definition of woman, thus conflating and confusing two protected characteristics. The Scottish Government has declined to remove the section referring to the GRA and have indicated that it is their understanding that a GRC changes a person’s sex for the purposes of the Equality Act. Whether they believe a person’s biological sex changes on receipt of a GRC or whether they now dispute that the Equality Act refers to biological sex remains to be seen.

Permission has been granted for the judicial review and the substantive hearing date has been set for 9th and 10th November 2022.

We believe this case puts the Committee in a very difficult position as, until such time as the court makes a ruling, the proper relationship between the GRA and the Equality Act cannot be understood, and nor can the consequences of any legislative reform of the GRA.

If the Scottish Government is correct that a person’s sex changes in the Equality Act with a GRC then it follows that the statement to Committee by Cabinet Secretary, Shona Robison, that the GRR Bill “does not redefine what a man or a woman is”, is incorrect. Clearly, if men who hold a GRC (transwomen) are included in the definition of woman (and women who hold a GRC (transmen) are excluded), then changing the circumstances under which a person is entitled to a GRC will also have the effect of changing the definition of woman.

The GRR Bill proposes a significant change to the eligibility criteria for a GRC and will include, for the first time, those without a medical diagnosis of gender dysphoria and those aged 16 and 17. The Scottish Government also estimates a tenfold increase in applications for a GRC. This diversification and expansion of GRC holders from the current situation will significantly change who is counted under the definition of woman.

Whether a person is defined as a man or a woman matters for the successful operation of the Equality Act across a broad range of provisions, including single-sex exceptions, equal pay claims and access to maternity rights, and we are concerned that this is underappreciated and poorly understood by the Scottish Government. It is, of course, vitally important because any action taken by the Scottish Parliament must be careful not to modify any of the protected characteristics, including the definition of woman, lest it strays into reserved matters.

The Scottish Government seems hopelessly confused and inconsistent when it comes to the definition of woman, with at least three different definitions currently in operation across various pieces of legislation and policy. Contrary to the position outlined above, it fully understood that sex was biological when SNP MSPs voted in favour of the Lamont amendment to substitute gender with sex in the Forensic Medical Services (Victims of Sexual Offences) Bill to ensure a request for a female medical examiner resulted in the provision of exactly that, and not a man with a GRC (transwoman).

At the other extreme, the Cabinet Secretary again contradicted the Scottish Government’s current position by asserting a GRC is not required for a man to fall under the definition of woman and access single-sex services for that sex, when she said to Parliament that “the 2010 Act does not apply exceptions specifically to toilets and changing rooms. Trans people can and do use those now, whether they have a GRC or not, and they have been using them for many years.” This fails to recognise the single-sex mandates in legislation relating to schools and workplaces as well as specific examples in the Equality Act Explanatory Notes – we have written separately to you about this matter.

A recent Scottish Government public consultation on the Review of Funding and Commissioning of Violence Against Women and Girls Services redefined a woman as “anyone who defines themselves as a woman”. Not only does this circular statement flagrantly disregard the Inner House ruling but it fails to recognise funding for women’s services can only be allocated via positive action measures in s158 of the Equality Act so must adhere to the protected characteristics. Our letters to both the review group and the Scottish Ministers asking for the consultation to be withdrawn and reissued with a correction have not received any response. We further note the Scottish Government only accepts applications for funding from individual women’s services on production of a LBTI inclusion policy that is transwomen inclusive. Again, this is not dependent on holding a GRC.

In summary, we believe the revised statutory guidance for the Gender Representation on Public Boards Act is unlawful. The Scottish Government believe otherwise and maintain a GRC changes a person’s sex for the purposes of the Equality Act. Not only does this decouple women’s biological sex from sex-specific provisions in the Equality Act, but it means reforming the GRA also carries a serious risk of intruding on reserved matters. The Scottish Government has a history of inconsistency and lack of understanding on both the definition of woman and the operation of the Equality Act. All of this leaves the Committee exposed, trying to make good law in the midst of a live court action, the outcome of which materially affects the reform.

This letter is now published on the Committee’s website.