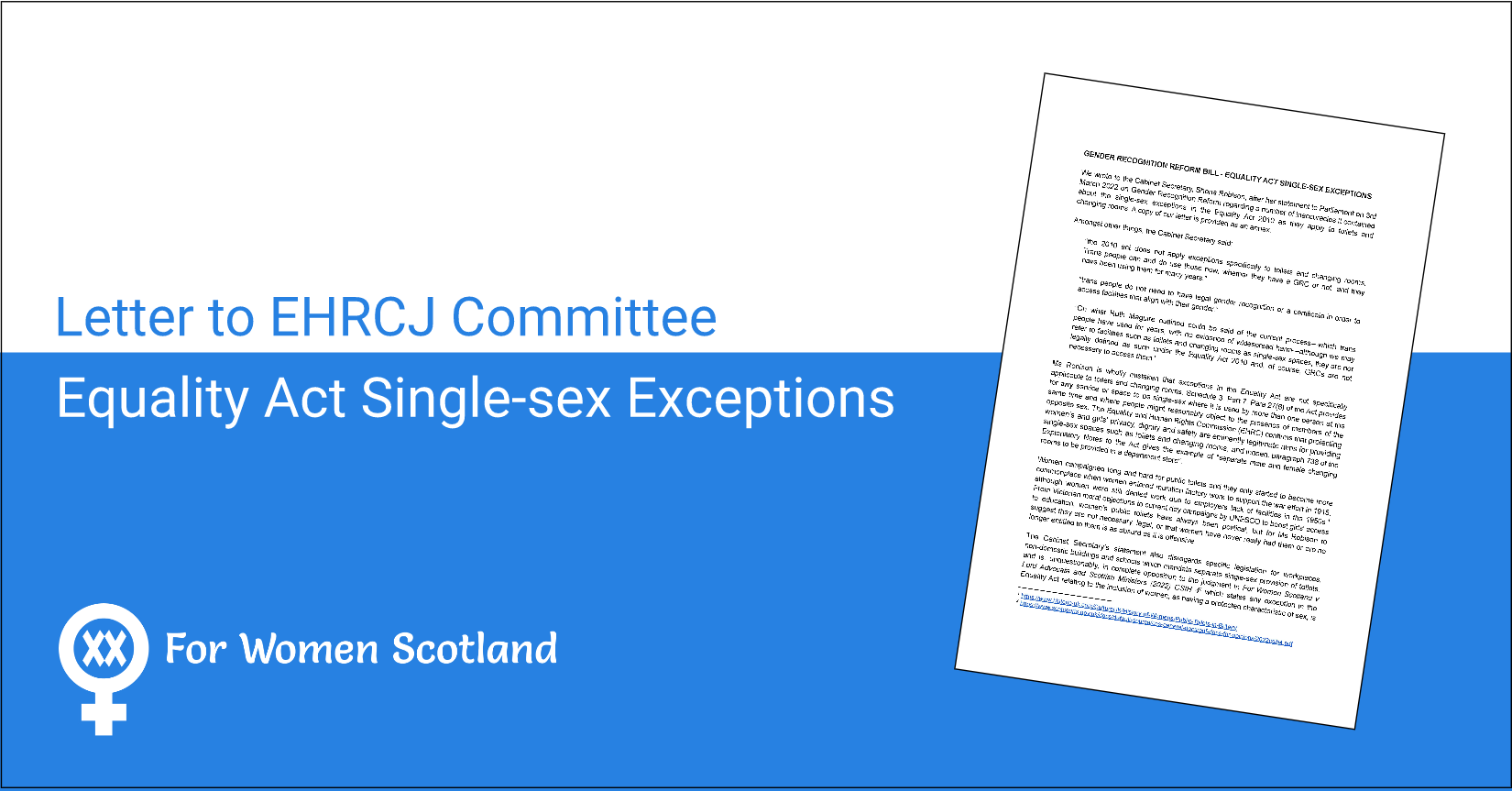 This is the second of two letters we sent to the Equalities, Human Rights and Civil Justice Committee on 30 August 2022. The first one on the impact of our new judicial review on the Gender Recognition Reform bill is here.

We wrote to the Cabinet Secretary, Shona Robison, after her statement to Parliament on 3rd March 2022 on Gender Recognition Reform regarding a number of inaccuracies it contained about the single-sex exceptions in the Equality Act 2010 as they apply to toilets and changing rooms.

Amongst other things, the Cabinet Secretary said:

“the 2010 act does not apply exceptions specifically to toilets and changing rooms. Trans people can and do use those now, whether they have a GRC or not, and they have been using them for many years.”

“trans people do not need to have legal gender recognition or a certificate in order to access facilities that align with their gender.”

“On what Ruth Maguire outlined could be said of the current process—which trans people have used for years, with no evidence of widespread harm—although we may refer to facilities such as toilets and changing rooms as single-sex spaces, they are not legally defined as such under the Equality Act 2010 and, of course, GRCs are not necessary to access them.”

Ms Robison is wholly mistaken that exceptions in the Equality Act are not specifically applicable to toilets and changing rooms. Schedule 3, Part 7, Para 27(6) of the Act provides for any service or space to be single-sex where it is used by more than one person at the same time and where people might reasonably object to the presence of members of the opposite sex. The Equality and Human Rights Commission (EHRC) confirms that protecting women’s and girls’ privacy, dignity and safety are eminently legitimate aims for providing single-sex spaces such as toilets and changing rooms, and indeed, paragraph 738 of the Explanatory Notes to the Act gives the example of “separate male and female changing rooms to be provided in a department store”.

Women campaigned long and hard for public toilets and they only started to become more commonplace when women entered munition factory work to support the war effort in 1915, although women were still denied work due to employers lack of facilities in the 1950s. From Victorian moral objections to current day campaigns by UNESCO to boost girls’ access to education, women’s public toilets have always been political, but for Ms Robison to suggest they are not necessary, legal, or that women have never really had them or are no longer entitled to them is as absurd as it is offensive.

The Cabinet Secretary’s statement also disregards specific legislation for workplaces, non-domestic buildings and schools which mandate separate single-sex provision of toilets, and is, unquestionably, in complete opposition to the judgment in For Women Scotland v Lord Advocate and Scottish Ministers (2022) CSIH 4 which states any exception in the Equality Act relating to the inclusion of women, as having a protected characteristic of sex, is limited to allowing provision to be made in respect of a “female of any age”. Provisions in favour of women, in this context, by definition exclude those who are biologically male.

We were extremely disappointed that the Cabinet Secretary declined our request to correct the Official Record and nor did the EHRC, who had also been sent the same letter, step in to provide a correction.

Since that date there have been two important developments. First, the EHRC’s Separate and single-sex service providers: a guide on the Equality Act sex and gender reassignment provisions, which was published in April. This clarifies that, of course, toilets and changing rooms are covered by the single-sex exceptions, gives examples of where they legally occur, and advises on the need to take into account other legislation that stipulates single-sex provision such the Workplace Regulations 1992.

Secondly, Aidan O’Neill QC provided legal advice on the provision of single-sex toilets for school pupils which set out how failing to use the single-sex exceptions in the Equality Act for toilet provision leads to a breach of a school’s duty, under the same Act, to prohibit harassment related to the pupils’ sex and which can be perceived by pupils as having the effect either of violating their dignity or of creating an intimidating, hostile, degrading, humiliating or offensive environment for them. This advice has been sent to all local councils and, while some councils have said they will ensure compliance, it may be the case that enforcement legal action will be necessary for others.

Given this new information it was, therefore, inexplicable for the Cabinet Secretary to repeat her earlier false claims when giving evidence to the Committee on 28th June, re-asserting that:

“Of course, GRCs are not necessary for accessing areas such as toilets, changing rooms and other spaces that are not restricted as they would be for exceptions under the 2010 Act. As I said earlier, trans women and trans men will have been using these spaces for many years”

As pointed out in our separate correspondence, this is one of many statements that contradicts the Scottish Government’s current stated position in response to our petition for a further judicial review on the Gender Representation on Public Boards Act where they claim a Gender Recognition Certificate (GRC) is required for a man to be classed as a woman for the purposes of the Equality Act (and hence access women-only provision).

The Attorney General for England and Wales, Suella Braverman, spoke at length earlier this month about the Equality Act and single-sex spaces during which she clarifed that schools and other organisations are expected to comply with her legal guidance on single-sex toilets. Concurring with the For Women Scotland Inner House ruling she re-stated that the Equality Act exceptions operate on the basis of sex as a biological term:

“In law, single sex services are intended for one sex only: that is the very thing permitted by Schedule 3. It follows that it is not possible to admit a biological male to a single-sex service for women without destroying its intrinsic nature as such: once there are XY chromosome adults using it, however they define themselves personally, it becomes mixed-sex.”

And speaking specifically of schools but in terms which apply equally to all services, she said:

“Yes, it is lawful for a mixed school to refuse to allow a biologically and legally male child, who identifies as a trans-girl, from using the girls’ toilets. This does not constitute direct sex discrimination and is not unlawful indirect discrimination on grounds of gender reassignment. Indeed, if the school did allow a trans-girl to use the girl’s toilets this might be unlawful indirect discrimination against the female children. Further, in law, there is a duty to provide separate single sex toilets, a breach of which would be unlawful under the School premises (England) Regulations 2012 and the Education (Independent School Standards) Regulations 2014.”

The comparable law in Scotland is the School Premises (General Requirements and Standards) (Scotland) Regulations 1967.

The Attorney General agreed with Aidan O’Neill’s legal opinion that once the legitimate and proportionate tests have been met to justify a space or service excluding the opposite sex, it is deemed legal at that point and there is no additional need to repeat the exercise for any other protected characteristic, including gender reassignment. This clarifies there is no indirect discrimination on gender reassignment (which encompasses those who hold a GRC as well as those who do not). As Ms Braverman said: “This would be to risk the Equality Act giving with one hand, and promptly taking away with the other”.

We feel it is important that this clarifying information is included in the Committee’s public record for the Bill and perhaps the Cabinet Secretary will now take the opportunity, particularly given the Attorney General’s keynote speech on the correct operation of the UK-wide Equality Act, to offer a correction to the Official Record.

This letter is now published on the Committee’s website.