I read this thread on Twitter by the marvellous @CroneInAMillion and thought it was worth keeping:

Thread for @PennyMordaunt. I am glad you are investigating the 4000% increase in girls reporting to gender clinics to change their bodies.

Your investigation needs to include a review of all the authoritative-looking materials (guidance for staff, and taught to children) used to propagate the false belief that gender stereotypes are reality and that gender non-conforming kids can be “fixed” by changing their bodies to look like the opposite sex.

Some of the “charities” involved cause concern. As just one example, take LGBT Youth Scotland.

This particular charity THIS YEAR used a fake government endorsement on its school materials for added authenticity when it sent them to schools.

It only admitted the government endorsement was fake when threatened with court action over allegedly false legal advice provided within the documents.

But let’s take a look at some of its materials, shall we, and see if there is anything concerning…

First up, I’ve become transgender. That was a surprise. I am gender non-conforming because I am a woman with Asperger’s. And that’s put me into the transgender umbrella for this charity. This “charity” is claiming that schoolgirls who don’t conform to stereotypes are transgender. 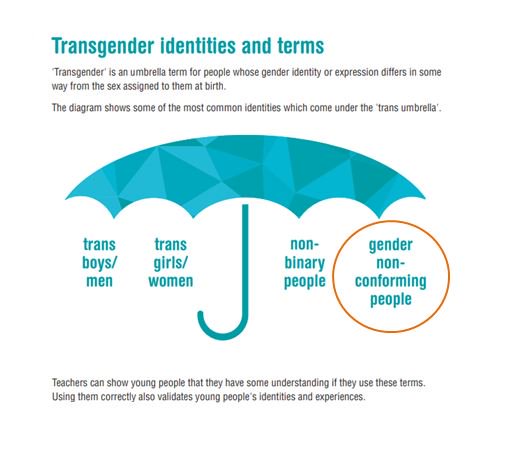 Staff are told to use words such as “gender non-conforming” to show children they understand and validate their identities. Yet such labels encourage kids to think they do not have a normal personality variation for their sex. This is detrimental to their emotional development.

“Non-binary” is presented as another form of transgender identity. Which is odd, because hardly anyone has 100% feminine or 100% masculine traits. Surely most people have a non-binary gender to varying degrees. This is just patholologising normality now.

There’s a similar problem with materials like the GenderBread Man, pushed by charities such as Mermaids, which describes “man” and “woman” as identities you choose. Then asks kids to plot on a line how “man” or “woman” they are based on similarity to gender stereotypes (!)

This “helpful guide” then tells them if they are a woman, a man, two-spirit or genderqueer based on how “manly” or “womanly” they are. For goodness sake, man/woman is just biology. You don’t have to match stereotypes to be a “man” or a “woman”. STOP TEACHING THIS TO CHILDREN!

But back to the LGBT Youth Scotland pack. There’s also some concerning guidance for staff (the main reason for the legal challenge earlier in the year), like parents not being told if their child were sleeping in a room with a child of the opposite sex but same gender identity.

Another important point is kids’ boundaries being dismissed if they don’t want someone of the opposite sex to see them getting changed.

I do not believe a male-run organisation with child pornography links and a fake government endorsement is legally or ethically suitable to tell teachers how to protect kids’ dignity and privacy when they are getting changed.

Please review all such materials.

It is worth noting that LGBT Youth Scotland received £260,000 from the Scottish Government this year.  Combined with the £200,000 given to Scottish Trans Alliance this accounts for nearly 10% of all the funding set aside for organisations involved in equality in Scotland. 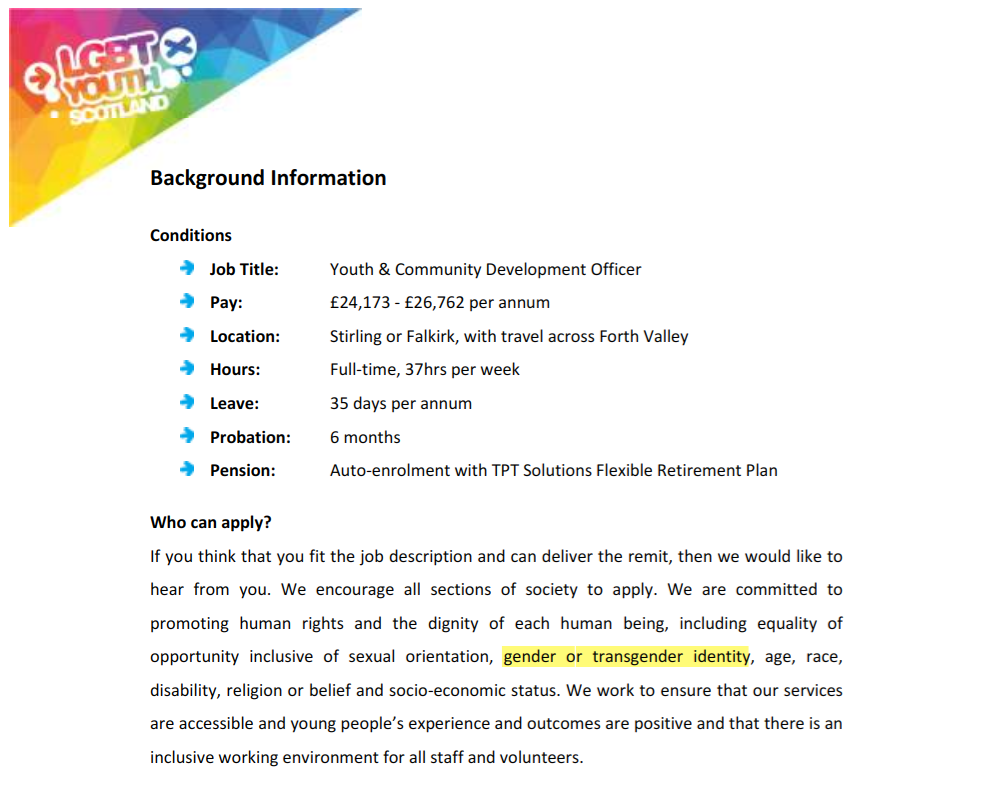