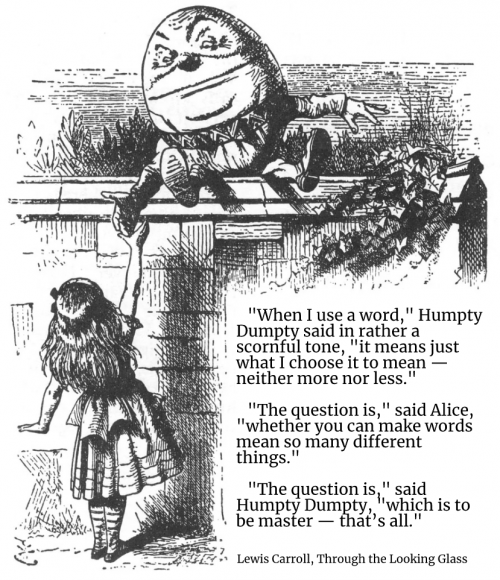 Written by Susan Smith. A shorter version was published in The Critic.

Which, or who, is to be master and whether you can make words mean different things, has been at the heart of much discussion over women’s rights recently. One hundred and fifty years after Lewis Carroll wrote this glorious nonsense exchange in Alice Through The Looking-Glass, we now see similar arguments trotted out with painful sincerity by politicians who struggle to define “woman” and latterly in court during the Judicial Review and subsequent appeal we brought over the Scottish Government’s attempts to redefine women in the Gender Representation on Public Boards Act 2018 (GRPBA). A hundred years after women won the right to vote, deciding who and what a woman was has suddenly become the most complicated philosophical question de nos jours.

For those who wonder how we arrived at a place where Alice-like common sense is deemed heretical and Humpty’s Butlerian disdain for social or linguistic norms is embedded in the establishment, the progress of the GRPBA is a cautionary tale.

In 2017, the Scottish Government introduced a Bill with the worthy aim of ensuring a “gender” (or sex) balance on Public Boards. Positive action measures are allowable under the UK Equality Act 2010 (EA2010), in this case, governed by the protected characteristic of sex, and the original Bill simply referred to “women”, the definition of which is given in the EA2010 as “a female of any age”. But during committee stages, this definition was challenged by lobby groups almost wholly funded by the Scottish Government.

Ultimately, the committee decided that sex difference – which still routinely sees girls denied rights or education – was irrelevant beside such weighty considerations as which name a person used on their electricity bills or which pronouns they put in their email signature, and a convoluted definition was introduced in the late stages of the Bill which meant that any man who claimed a gender idenity of “woman” was included and any women who rejected their sex were excluded.

The GRPBA passed without much opposition. Funded women’s groups, who should have been alert to any attempt to water-down protection for the demographic they supposedly represented, had a cosy relationship with groups like Scottish Trans Alliance, who had pushed for the change, and funding streams to protect. Only women’s groups fighting on the fringes and worried about the challenges posed by proposed reform of the Gender Representation Act noticed, but without influence or access they could do little.

That For Women Scotland were finally able to bring this JR at all is testimony to how much things have changed, but also to the determination of our co-director Trina Budge who recognised the risk of leaving a potentially unlawful definition of “woman” on the statute books. Like all good 3 Act plays, there was a moment of crisis at the end of the second Act when we lost our Judicial Review last year. We faced not only the prospect of the loss of the language to describe our sex, but also of frightening sums of money. The decision to carry on to appeal was not one we undertook lightly, we knew that the might and financial heft of the Scottish Government was against us. During the original JR, a Government funded lobby group had intervened using pro-bono lawyers who also received grants from the government. Meanwhile, we were reliant on small donations from thousands of supporters. Our detractors like to pretend we are funded by a range of malevolent organisations or foreign governments, the reality is that the average donation to the fund was less than £40.

The judgement handed down at appeal was a huge vindication of the decision to fight on. The key points included:

At the remedy hearing on 22nd March, Lady Dorrian found that as our appeal had succeeded on the primary argument, that the definition of woman was outwith the legislative competence of the Scottish Parliament, we would be awarded full costs.

But, of course, this fight is not yet over. The Scottish Government continues to rely on advice from the lobbyists who have a stated interest in  removing protections for women in law and a track record of providing dubious legal guidance.  And, just as they like to claim gender is fluid, so is the Government’s concept of the rights conferred by Gender Recognition Certificates (GRCs). In introducing the recent Bill, Ministers argued GRCs have no bearing on rights or whether someone can be excluded from sex-based categories. At the Remedy Hearing, they tried to argue that transwomen with GRCs did, indeed, have additional rights.

To return to Humpty Dumpty, the lobbyists and politicians in hock to gender ideology believe that any definition which is not nailed down is open to re-interpretation. In law, it never used to be necessary to define commonly understood words, now Humpty and friends are making hay with definitions and retrospectively applying them to legislation. An indication of where the Scottish Government might go next was provided by their QC, Ruth Crawford, who argued “the Equality Act did not say as my learned friend does in his note that female means biological female, it means female”. Having been forced to accept that “woman” means a “female of any age”, it seems that the Scottish Government may now try to re-define the latter instead. If they do, we will be ready.