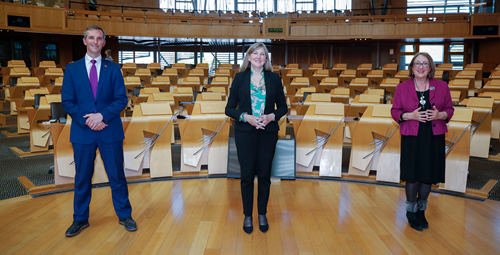 We sent the following email to Alison Johnstone, Presiding Officer at the Scottish Parliament on 21 March 2022 regarding the use of “cis” by MSPs in the chamber.

Having watched the Parliamentary debate on Tuesday 15 March on Conversion Practices we wish to raise a complaint under the Code of Conduct for MSPs Rule 7.3.1 which states: “Members shall at all times conduct themselves in a courteous and respectful manner”.

This is also highlighted in the guidance for section 7 which states: “Members shall at all times ensure that their choice of language in the Chamber is appropriate and meets the high standards expected by the general public”.

During the debate two MSPs, Karen Adam and Gillian Mackay used the term “cis” which is an offensive term for many people, including all of us at For Women Scotland.

It is a confusing, divisive and contested term, so let’s be clear about what it actually means.

Stonewall defines the term cis as “someone whose gender identity is the same as the sex they were assigned at birth” and says gender is “often expressed in terms of masculinity and femininity, gender is largely culturally determined and is assumed from the sex assigned at birth”.

When applied to a woman, cis therefore means she is someone who was assigned female at birth and who identifies with socially determined feminine stereotypes.

This is sexist, regressive and insulting to the vast majority of people. It is inappropriate in an era where most people do not wish to adopt old-fashioned ideas of masculinity and femininity and is counter to many government and education programs to break these stereotypes by, for example, encouraging girls into STEM careers. It is also factually incorrect: sex is not assigned, it is observed and recorded at birth.

By labelling listeners to the debate as cis it also disregards the right of women to determine their own identity, and it implies they are somehow privileged over men who claim the “gender identity” transwomen – it minimises, and even erases, the structural discrimination that women face from birth.

People are clearly entitled to their own beliefs and Ms Adams and Mackay may wish to refer to themselves in such terms, but that is not what they did. They imposed the term on every woman and lesbian listening to their parliamentary speeches and, since the vast majority do not share their ideology, it was extremely discourteous and disrespectful.

Please refer to Forstater v CGD Europe which held that gender critical beliefs, which include the belief that biological sex is real, important, immutable and not to be conflated with gender identity, are protected under the Equality Act 2010 and Article 9 of the European Convention on Human Rights. Furthermore, these beliefs are widely shared and are consistent with the law on sex and gender. They were found to be “worthy of respect in a democratic society”.

Language in the chamber is important and the high standards expected should ensure that politicians do not use terms that refer to listeners with disrespectful terminology that many find deeply offensive. We ask you to ensure that it is not used again in the chamber or in any parliamentary proceedings.

Gillian Mackay MSP: “It is one that we have heard before against cis lesbians”

Thank you for your email. I recognise that you have concerns over some of the terminology used in the debate on Tuesday 15 March.

As you have noted, the conduct of parliamentary business is governed by the Parliament’s Standing Orders and the Code of Conduct for MSPs. The Deputy Presiding Officers and I must act with impartiality and treat all members equally. In applying the rules and standards, we consider carefully various factors, including the context in which contributions are made, the protections against discrimination and harassment conferred by the Equality Act 2010 and rights to freedom of expression and belief.

While robust scrutiny of issues that come before the Parliament requires that Members are able to express a wide range of views, the Deputy Presiding Officers and I are aware of the sensitivities of language and are determined that debate complies with the Parliament’s rules and standards. We are conscious that there are people who reject certain terms or consider them to be offensive. We expect all members to consider very carefully not just their choice of words but also the tone in which they are delivered. We will not accept members behaving in a manner that is intended to be personally offensive or insulting.

Thank you again for writing.

Thank you for your response and recognition that the Parliament understands that there are many people who reject the term “cis” and consider it to be offensive. Gender critical views are both widely held and protected by the Equality Act, and must be respected by all Parliamentarians. Can you please confirm that there will be no recurrence of its use in Parliament when referencing members of the general public?

Thank you for your further email.

Being able to express, debate, explore and challenge views, including views that might offend, is key to the proper functioning of the Parliament. The European Court of Human Rights has recognised that freedom of expression is an essential part of democracy and that it is especially important for elected members in representing their electorates.

My role as Presiding Officer is to act impartially and to treat all Members equally. The judgements of the European Court of Human Rights support the principle that there will be a wide range of beliefs that are equally worthy of protection and such rights have to be balanced against each other. While the expression of certain beliefs might be offensive to some, as Presiding Officer I have to give freedom of expression rights equal weight insofar as they relate to such beliefs.

The Deputy Presiding Officers and I will not, however, tolerate views being expressed in a way that is personally abusive or that might give rise to harassment. While protecting freedom of expression, we are equally determined that Members act with courtesy and respect, in line with the Scottish Parliament’s key values and principles and in compliance with the Parliament’s own Code of Conduct for MSPs.

Thank you again for writing.

Thank you for your further reply. Unfortunately, while we both expect Members to act with courtesy and respect it appears that no action has been take to achieve this, despite your office recognising many people, whose beliefs are protected in law, reject the term “cis” and consider it to be offensive.

I would like to put it on record that your inaction on this matter paved the way for one of the MSPs concerned, Karen Adam, to repeat the term directly to my colleague in the full knowledge that she would find it offensive. That this was done during an evidence session for the Equalities, Human Rights and Civil Justice Committee, to which we were invited to give our expert evidence, was nothing less than a misuse of power and which we very much feel was done with the intention of provoking a reaction.

At a time when the Parliament is consulting to try and increase public participation and ensure its work involves, reflects and meets the needs of the full range of communities it represents, I would urge you to take steps to further prevent the alienation of a large proportion of women.