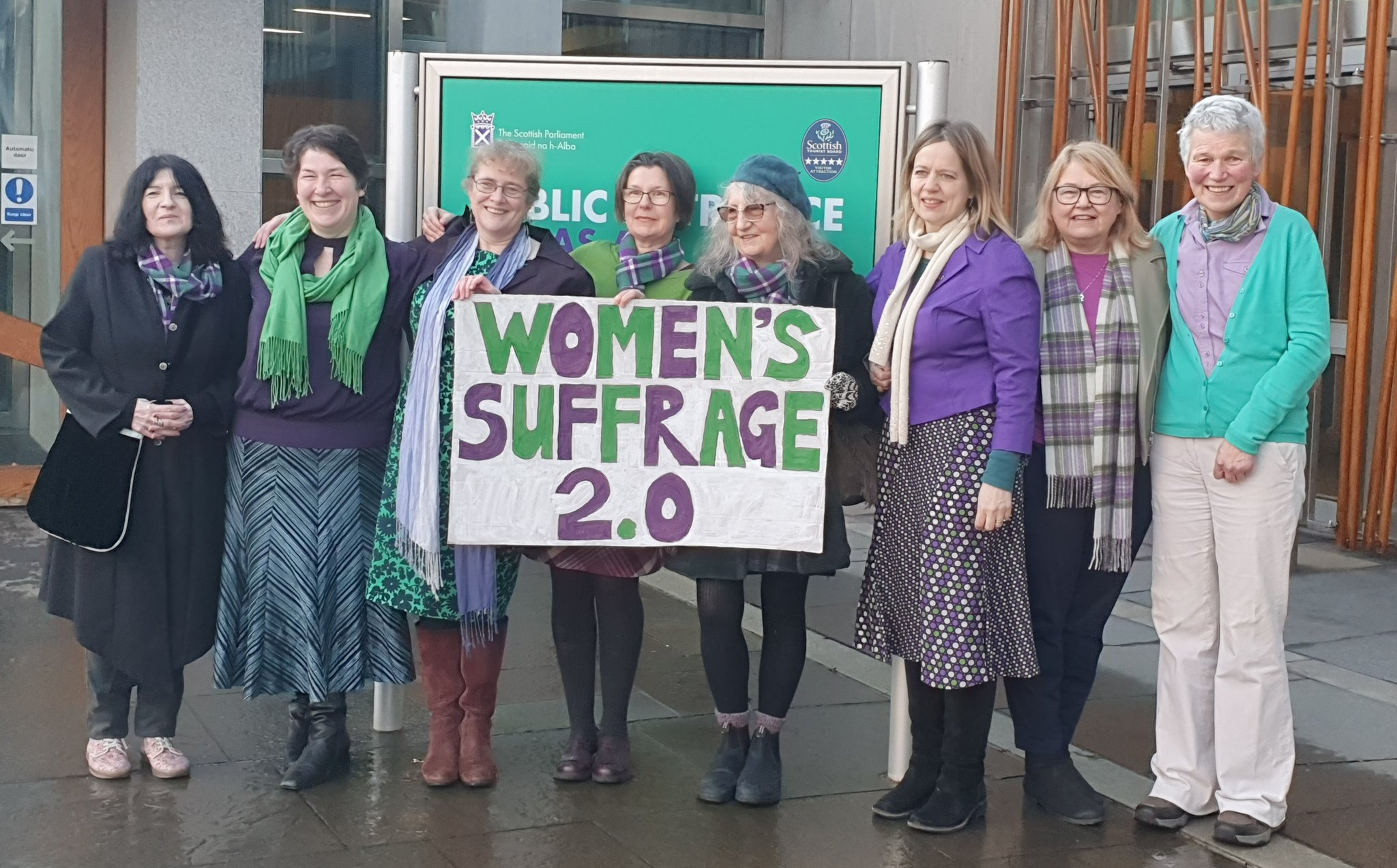 Rachael Hamilton MSP: “Does the Cabinet Secretary believe that a Gender Recognition Certificate is relevant under the Equality Act or is irrelevant, because two weeks ago, the Scottish Government were arguing in court that a GRC changes someone’s sex under the Act. Can you explain?”

Shona Robison, Cabinet Secretary: “The point about the 2004 [Gender Recognition] Act and the effect of obtaining a Gender Recognition Certificate is the same in section 9 of the 2004 Act, none of this changes that and essentially it enables people to change their birth certificate to be in line with their acquired gender. That has been the case for 18 years and that remains the same. Now I’m not going to comment on the court case other than to say the position of the Scottish Government is exactly the same as the Equality and Human Rights Commission as they set out in court. So the Equality and Human Rights Commission have set out in court their position. We agree with that position. No difference in terms of the position.”

The Scottish Government seems utterly incapable of answering a straightforward question, and when it’s one that is key to the whole operation of Gender Recognition Certificates (GRCs) and their interaction, if any, with the Equality Act it’s particularly galling. Why on earth wouldn’t Shona answer with the Government’s view? There was nothing stopping her, no legal impediment, no jury to be shielded. And without this answer, no MSP can possibly know the consequences of the Bill they are charged with voting into legislation. They’ll be voting legally blind.

For anyone who doesn’t know which court case Ms Robison refers to, and there must be many, it is this one: For Women Scotland v the Scottish Ministers. And unless you were one of the couple of dozen or so people actually in the court room, or one of the 43 people watching online then you will not have a clue what she is talking about. And not even then, because Mr Mitchell the KC representing the EHRC said numerous times that everything he had to say was in his Note of Argument, as previously submitted to the court, and there was little point in repeating it. He did say it should be publicly available, but, as far as I know, the EHRC has not published its written submission.

So let’s lay it out. And not from unpublished court documents or obtuse half-answers from those in Government who should know better, but from information that is in the public domain as spoken in the Court of Session on the 9th and 10th of November by the King’s Counsel for the Scottish Ministers.

Yes, the Scottish Government thinks a Gender Recognition Certificate changes a person’s sex and a man becomes a woman under the Equality Act. This magical change happens on receipt of a bit of paper that no-one is allowed to see and in spite of their KC agreeing this certificate does not change a person’s biological sex. But we are all quite wrong, apparently, to argue that sex is a matter of biological fact and not law. It seems, in the eye of our all powerful Government, the law need not reflect reality, but rather, what the law says is reality: “the construction of words in a statute is self-evidently a question of law, and not a question of fact”.

(3) Subsection (1) is subject to provision made by this Act or any other enactment or any subordinate legislation.

Pay attention now, because this is the bit of the GRA that is the entirety of the Scottish Government’s argument. Section 9(1) works via the conflation of sex and gender to change a person’s sex, for all purposes. So for a man with a full Gender Recognition Certificate who has the acquired gender of female, that person’s sex becomes that of a woman and she will share the protected characteristic of sex with other women, for all purposes. She will have all the same rights and protections under the Equality Act as any other women and be fully entitled to access single-sex spaces and services as a woman.

The only exceptions to this, where sex retains its biological meaning, across the whole of the statue book, are laid out in the GRA (inheritance rules, or rape prosecutions, for example) or, as section 9(3) allows, in any other piece of legislation that contains an explicit exception. From their Note of Argument, as quoted in court by our KC Mr O’Neill, the Scottish Government stated that section 9(3) does not apply to the Equality Act.

Except, of course, when it doesn’t. Mr O’Neill ran through quite the collection of other statutes where the word “woman” was mentioned and which clearly could only apply to biological women, and could not possibly refer to biological males, including the Abortion Act 1967, Human Fertilisation and Embryology Act 1990, Surrogacy Act 1985 and the National Health Service (Free Prescriptions) (Scotland) Regulations 2011. The Scottish Government agreed that the section 9(3) rule meant that the biological definition of sex all in these instances was retained, despite none of these laws explicitly saying so.

The Victims and Witnesses Act 2014 deserves special mention here. This was the law changed by the famous #sixwords amendment “for the word gender, substitute sex” by Johann Lamont MSP when the Forensic Medical Services Bill was going through Parliament two years ago. Those were the giddy days when the Scottish Government recognised that sex and gender were distinct concepts and the Bill was passed on the common understanding that when a rape victim asked for the sex of her medical examiner to be a woman, she would actually get just that, and not a man with a GRC. As to whether the Scottish Government’s new interpretation of “sex” applies here or not, I’m afraid we still await an answer. According to Mr O’Neill the Scottish Minister’s KC was “silent, shockingly silent” on whether women still have the right to a guarantee that only another woman will examine them. Perhaps we should ask Shona Robison?

Which brings us to the grand finale, the Equality Act itself, where there is only one definition of woman that the Scottish Parliament can legislate for, and it is definitely their concept of legal sex and absolutely not the section 9(3) provision for biological sex. Except…except when it came to the protected characteristic of pregnancy and maternity where even the Scottish Minister’s KC accepted that it was a “perfectly sensible reading” for their section 9(1) “for all purposes” legal sex to be disapplied in preference of biological sex. To do otherwise would mean that the Freddy McConnell‘s of the world, those pregnant women who possess a GRC saying they are male, would have no recourse if their employer decided to follow the letter of the law and deny pregnancy rights and maternity leave. Given the explosion of young women who currently identify as trans this is not an insignificant scenario.

At this point, one would hope it’s clear the Scottish Ministers argument fell apart somewhat. The notion of legal sex cannot be sustained across multiple pieces of legislation and it cannot even hold together within the particular Act in question. Our KC likened it to a “pickNmix approach” whereby “sometimes, if it suits them, it means biological women, other times, if it suits them, or if they haven’t been faced up to the implications, it means biological women plus men with a GRC”. It’s a prescription for chaos.

Our position, on the other hand, is consistent and coherent. The biological definition can be applied across the Act, it means that we know exactly how the Act works, what protections it gives, and specifically the protections which it gives and is intended to give for biological women.

Perhaps that’s why the Cabinet Secretary alluded to Section 9 in her response, but couldn’t quite pick whether we should be the section 9(1) or the 9(3) version of a woman today. Perhaps no-one had told her she could be a biological woman, in fact, as well as in law.

As Elaine Miller said: “I want my words, I want my rights and I want my elected representatives to do their job with less abject contempt for democracy. This behaviour was shameful to observe.”

One way or another, this needs to be addressed. Bring on stage 3 of the Bill.

See also our blog post on the Substantive Hearing.