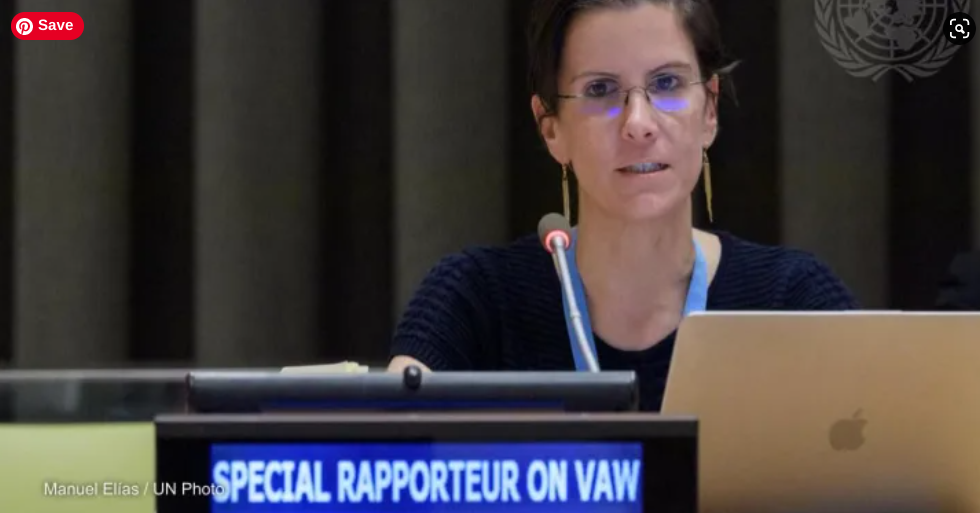 Reem Alsalem, Special Rapporteur on violence against women for the United Nations recently wrote to the UK Government to raise concerns about some aspects of the Gender Recognition Reform Bill which is currently before the Scottish Parliament, calling for the Bill to be paused to ensure its compliance with the UN Convention on the Elimination of Discrimination against Women (CEDAW), that the voices of female victims of male violence are heard, and to await the outcome of our judicial review.

Today we, and 28 other women’s organisations and individuals, have sent a joint letter to Ms Alsalem to welcome her intervention and to say that the proposed reform should not come at the expense of women’s rights to safety, privacy, and dignity on the basis of sex.

A PDF of the letter can be downloaded here, and is given in full below.

We write as a set of groups and individuals, from Scotland and elsewhere in the UK, exercised about the impact on women of the Gender Recognition Reform (Scotland) Bill currently before the Scottish Parliament. We do so to set out our alternative view, provide context to the letter noted above, and to comment on it. We have had limited time to gather signatories and believe others may wish to add their support.

We welcome your intervention.

We submit that the international ambition of improving safety and respect for those with transgender identities should not be accomplished at the expense of women’s rights to safety, privacy, and dignity on the basis of sex, including access to effective trauma-informed services.

We use “sex” here to mean what the Inner House of the Court of Session of Scotland referred to as “biological sex”. The Court of Session identify this definition as that which should be applied in any circumstances “affecting status, or important rights, in particular the rights of others”, and cite examples which “all have in common … that they concern status or important rights.”

We note a great imbalance in the discussion here at international level. Professor Robert Wintemute, a co-author of the original Yogyakarta principles, has said (here): “If I had thought through the implications of Principle 3, I would have had to consider the potential for conflict with women’s rights, but I didn’t…Women’s rights weren’t raised.” He added last week: “Five years ago, I would have supported the Bill. But I have listened to the concerns of lesbian, bisexual and heterosexual women and changed my mind.”

We draw attention to the Preamble of the UN Convention on the Elimination of All Forms of Discrimination against Women which states:

“discrimination against women violates the principles of equality of rights and respect for human dignity, is an obstacle to the participation of women, on equal terms with men, in the political, social, economic and cultural life of their countries.”

And to the recognition in Article One that discrimination:

“on the basis of sex … has the effect or purpose of impairing or nullifying the recognition, enjoyment or exercise by women, irrespective of their marital status, on a basis of equality of men and women, of human rights and fundamental freedoms in the political, economic, social, cultural, civil or any other field.”

We further note that the Preamble to the UN Declaration on the Elimination of Violence against Women recognises:

And highlight that Article Three states:

“Women are entitled to the equal enjoyment and protection of all human rights and fundamental freedoms in the political, economic, social, cultural, civil or any other field. These rights include, inter alia :

The issue at stake

At the heart of the issue here, directly relevant to your remit, is the value placed on women’s right and ability to set personal boundaries based on sex, when they need to, with certainty. We do not consider here other issues relevant to women’s rights raised by the Bill, such as fair competition in sports or the effectiveness of anti-discrimination measures.

We believe the answers to four questions determine how seriously the rights to boundaries based on sex are taken. These relate to situations where it matters to a woman that a person is providing any service (including performing physically intimate procedures) or sharing any space where questions of privacy, dignity or safety arise, will be the same sex as her.

We believe that the organisations who have written to you do not value sufficiently the ability of women to be readily able to set personal boundaries in relation to other people on the basis of sex, when they need to.

We hope you might establish from the Scottish Government, and others writing to you in support of its proposals, their answer to the four questions set out above, not as a matter of current law, but as one of principle, and what rights, if any, they believe women should have to set personal boundaries based on sex.

Related to this, we also note the importance of women’s psychological safety and how, in contexts where the sex of another person matters, that can be compromised if our accurate perception of a person’s sex is contradicted, or its expression suppressed. We believe such policies and practices can amount to a form of coercive control.

Experience in countries which have legislated here already

We are aware that it is repeatedly argued that there is “no evidence” of negative effects from similar legislation in this area. We believe that an ‘absence of evidence is evidence of absence’ argument comes from adopting a hierarchy of rights in which women’s rights based on sex are demoted. It also places an impossible burden of proof on almost wholly voluntary campaigners who find themselves opposing state machinery and state-funded actors. It should be rejected.

To this end, we note that:

We are not surprised that you have reported receiving many messages from women in many countries in Europe and beyond thanking you for raising these issues and expressing concerns about similar planned legislation in their countries. We expect you will receive many from women in countries that have introduced laws in this area with inadequate attention being paid to their impact on women and girls’ dignity, privacy and safety.

Points made in the letter of 29 November

Regarding the letter from the six Scottish organisations, we note the following:

We regret that the signatory organisations of the 29 November letter have not sought at any point to engage with those who are concerned about the impact of the legislation on women in Scotland.

In Scotland, day-to-day, face-to-face support for women who have been subject to violence and abuse is provided by numerous independent organisations, rather than those who have written to you. Most of these provider organisations (62 in total) now receive central government funding under the national Equally Safe (Violence Against Women and Girls) Fund, only recently placed at arm’s length from the Scottish Government.

RCS campaigns at national level and sets standards for a network of 17 local direct service providers. It receives national funding to manage a national phone line (5pm-midnight); provide specialist support to individual women going through the justice system; and undertakes educational work. SWA describes itself as ‘coordinating, influencing and campaigning’. It is the national office of a network of 34 independent local direct service providers and receives national funding to manage a national Domestic Abuse and Forced Marriage Helpline (24 hours). Two organisations (Just Right, Scottish Women’s Rights Centre, itself a project of RCS) provide legal and advocacy support to individuals.

There has not been any substantial consultation with local providers of VAW services in Scotland on the position taken by third sector bodies at national level. We draw your attention to the comments from Isabelle Kerr quoted below and further evidence that women working within front-line services in Scotland have felt constrained from contradicting the position taken by organisations at national level, as illustrated in this interview.

We note that Isabelle Kerr, who recently retired as Manager of Glasgow and Clyde Rape Crisis Centre and has 40 years’ experience working in the women’s sector in Scotland and internationally, has said that women contacting services in Scotland can no longer “even ask if I can have a woman to support me” (6 October 2022, at 32.0mins here).  She added that she and one other woman working in the sector had been “hounded out of our jobs because of what we believe”. She observed that Engender, RCS, SWA and Zero Tolerance had previously issued a statement which asserted that services in Scotland had included males who identify as women for many years, and that no problems had ever been reported. On this Ms Kerr commented: “none of that was accurate…not one single rape crisis centre and not one single women’s aid centre was consulted before that statement was put out… There are groups on the ground who are scared to speak out because it is a condition of funding.” She added “trauma doesn’t recognise legislation.”

We ask you to consider our submission alongside others you have received.