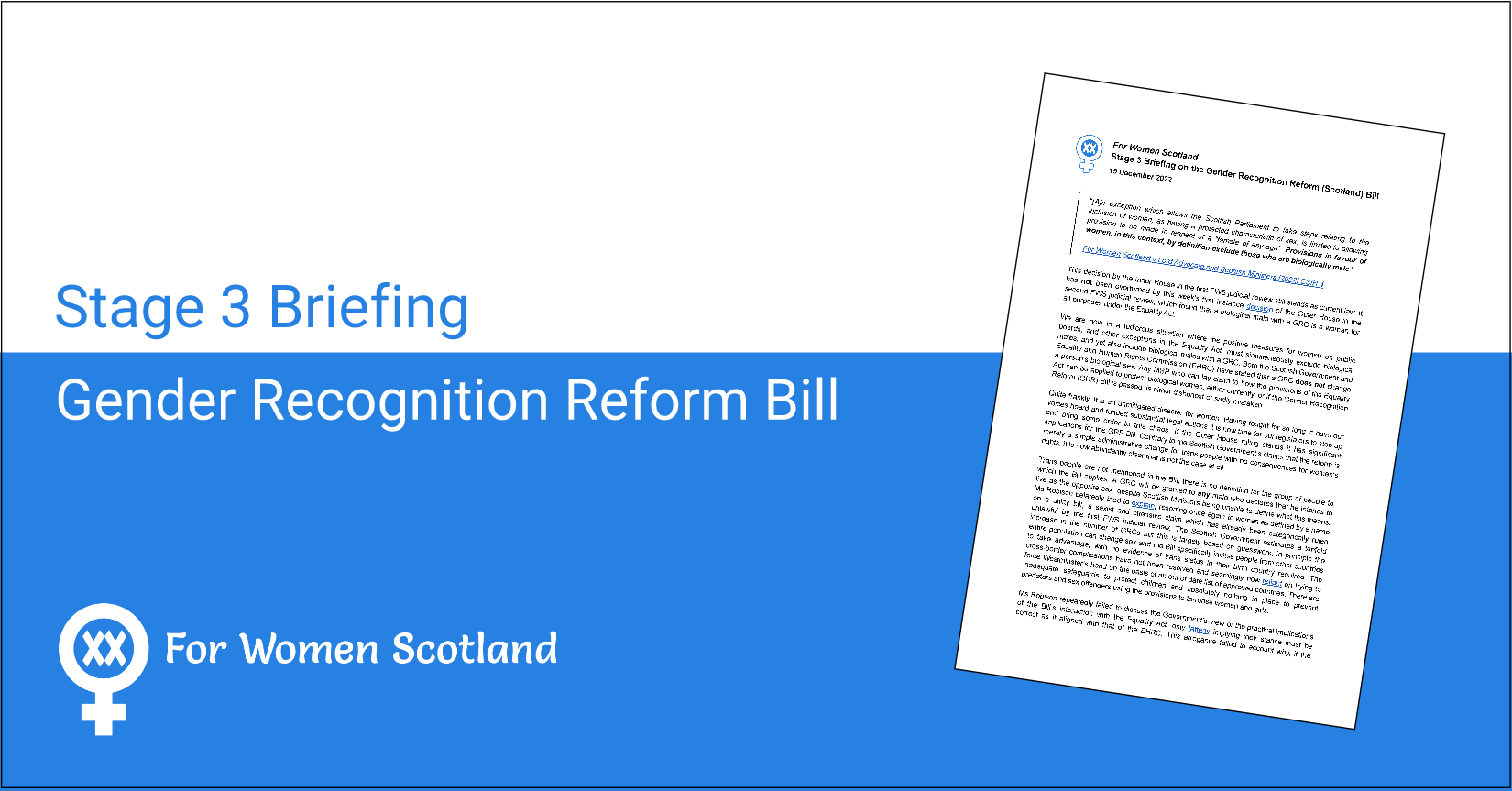 The following briefing was sent to all MSPs as a PDF on 19th December ahead of the Stage 3 Parliamentary debate on the 20th and final vote on the Bill on the 21st December.

“[A]n exception which allows the Scottish Parliament to take steps relating to the inclusion of women, as having a protected characteristic of sex, is limited to allowing provision to be made in respect of a “female of any age”. Provisions in favour of women, in this context, by definition exclude those who are biologically male.“

We are now in a ludicrous situation where the positive measures for women on public boards, and other exceptions in the Equality Act, must simultaneously exclude biological males, and yet also include biological males with a GRC. Both the Scottish Government and Equality and Human Rights Commission (EHRC) have stated that a GRC does not change a person’s biological sex. Any MSP who can lay claim to how the provisions of the Equality Act can be applied to protect biological women, either currently, or if the Gender Recognition Reform (GRR) Bill is passed, is either dishonest or sadly mistaken.

Quite frankly, it is an unmitigated disaster for women. Having fought for so long to have our voices heard and funded substantial legal actions it is now time for our legislators to step up and bring some order to this chaos. If the Outer House ruling stands it has significant implications for the GRR Bill. Contrary to the Scottish Government’s claims that the reform is merely a simple administrative change for trans people with no consequences for women’s rights, it is now abundantly clear that this not the case at all.

Trans people are not mentioned in the Bill, there is no definition for the group of people to which the Bill applies. A GRC will be granted to any male who declares that he intends to live as the opposite sex, despite Scottish Ministers being unable to define what this means. Ms Robison belatedly tried to explain, resorting once again to woman as defined by a name on a utility bill, a sexist and offensive claim which has already been categorically ruled unlawful by the first FWS judicial review. The Scottish Government estimates a tenfold increase in the number of GRCs but this is largely based on guesswork; in principle the entire population can change sex and the Bill specifically invites people from other countries to take advantage, with no evidence of trans status in their birth country required. The cross-border complications have not been resolved and seemingly now reliant on trying to force Westminster’s hand on the basis of an out of date list of approved countries. There are inadequate safeguards to protect children and absolutely nothing in place to prevent predators and sex offenders using the provisions to terrorise women and girls.

Ms Robison repeatedly refused to discuss the Government’s view or the practical implications of the Bill’s interaction with the Equality Act, only latterly implying their stance must be correct as it aligned with that of the EHRC. This arrogance failed to account why, if the EHRC were correct that a GRC changes sex in the Equality Act, the Government were then so dismissive of their concerns that this would lead to the undermining of women’s rights in the Equality Act by extending GRCs to a much larger and diverse group of people.

As the EHRC warned, the Outer House ruling and the reform Bill will now make it almost impossible for women to access single biological sex spaces and services such as hospital wards, sports, prisons, and trauma and intimate care. After all, what justification can there be to exclude “women” (those biological males with a GRC, and who we cannot refer to as men in law) from women-only spaces? The UN rapporteur for gender identity, Victor Madrigal-Borloz, has been quick to tell the BBC that “Transwomen are women. So of course, they are entitled to participate in women’s sports”. Note that he does not even qualify this as transwomen with a GRC. Credible threats have already been made to legally challenge Beira’s Place, the only rape crisis service in Scotland for biological women.

Far too little attention has been paid to health boards who say the Section 22 privacy rights in the GRA make it impossible to guarantee a same biological sex carer for such intimate acts as toileting, washing and dressing. The Outer House decision embeds the likelihood that a male will be provided, sometimes with full sole access to an incapacitated woman or girl’s home, and in spite of a reasonable request for assistance from a woman. This is wrong. Women have the right to dignity, privacy, fairness and safety.

Impossible as the single-sex exceptions will become, the provisions in the equality and anti-discrimination strands of the Equality Act are also set to be hampered by an increase in GRC holders. There is no mechanism to exclude males with a GRC from consideration and women will increasingly be denied recourse to the law for equal pay claims where the male comparator will be deemed a woman in law. Public boards can once again be filled with biological males but be deemed to satisfy parity between men and women.

Crucially, but so far given no consideration by the majority EHRCJ Committee, is the loss of rights for those biological women who hold a GRC. They will now be legally classed as male and can have no expectation of accessing women-only services. They will have no recourse to the law if discriminated in their job because of their biological sex or denied maternity leave by an employer maintaining the legal provisions only for “pregnant women”. Given the explosion of young women who currently identify as trans and who will access the new GRC process this is not an insignificant scenario and merits significantly more attention.

If it is wondered why Mr Madrigal-Borloz has been invited back to give evidence for the second time, it may be because his views align with that of the Scottish Ministers and require a final emphasis of the direction of travel, albeit completely misleading on Scotland’s obligations. While the Ministers were in court arguing that a GRC is necessary for a man to be deemed a woman in law and acquire access to public boards and other provisions for women, Ms Robison was telling Parliament that “trans people do not need to have legal gender recognition or a certificate in order to access facilities that align with their gender”.

The position is stark, and MSPs should take note that no publicly funded single-sex space in Scotland is currently available on the basis of the terms of either court judgment. No proposals to bring hospital wards, sports, intimate care, prisons, etc into line have, or will be brought forward. If GRC by self-id is introduced the Scottish Government has already laid out its stall, evidence of status cannot and will not be asked for and we cannot judge the evidence before our eyes. It may well have just scrapped the GRA entirely and decreed that women, the biological kind, must defer to the demands of men to be in our spaces at will.

In contrast, the Attorney General recognised the importance of biological sex under the Equality Act when setting out her legal advice and the Prime Minister has indicated an intention to review the Equality Act to make it clear that sex is indeed biological. The ruling in the second FWS judicial review is not applicable in the rest of the UK and the net result will be a two tier system of rights for women, under a nominally UK-wide law, compounded by an unprecedented increase in Scottish GRC holders far beyond the group of people the original GRA intended.

The place and time to sort this out is here and now. MSPs must do the job they were elected to do and represent the majority view of constituents and take action to protect women’s rights. They only way to do this is to vote for an amendment that states a GRC issued under the GRR Bill does not change a person’s sex under the Equality Act.

So far none of the amendments put forward achieve this. It is a travesty that no time was allowed to take stock of the Outer House ruling or submit appropriate amendments, with the deadline for amendment submission coming at exactly the same time as publication of the court decision. It is inexcusable that time has been found to invite witnesses back for a second time, yet no evidence sessions have been allocated to consider the new information from the court ruling and its effect on the legal consequences of GRCs. This leaves any MSP who has any concerns or doubts at all about this Bill only two options: call for such an amendment to be permitted, or vote against the Bill at Stage 3.