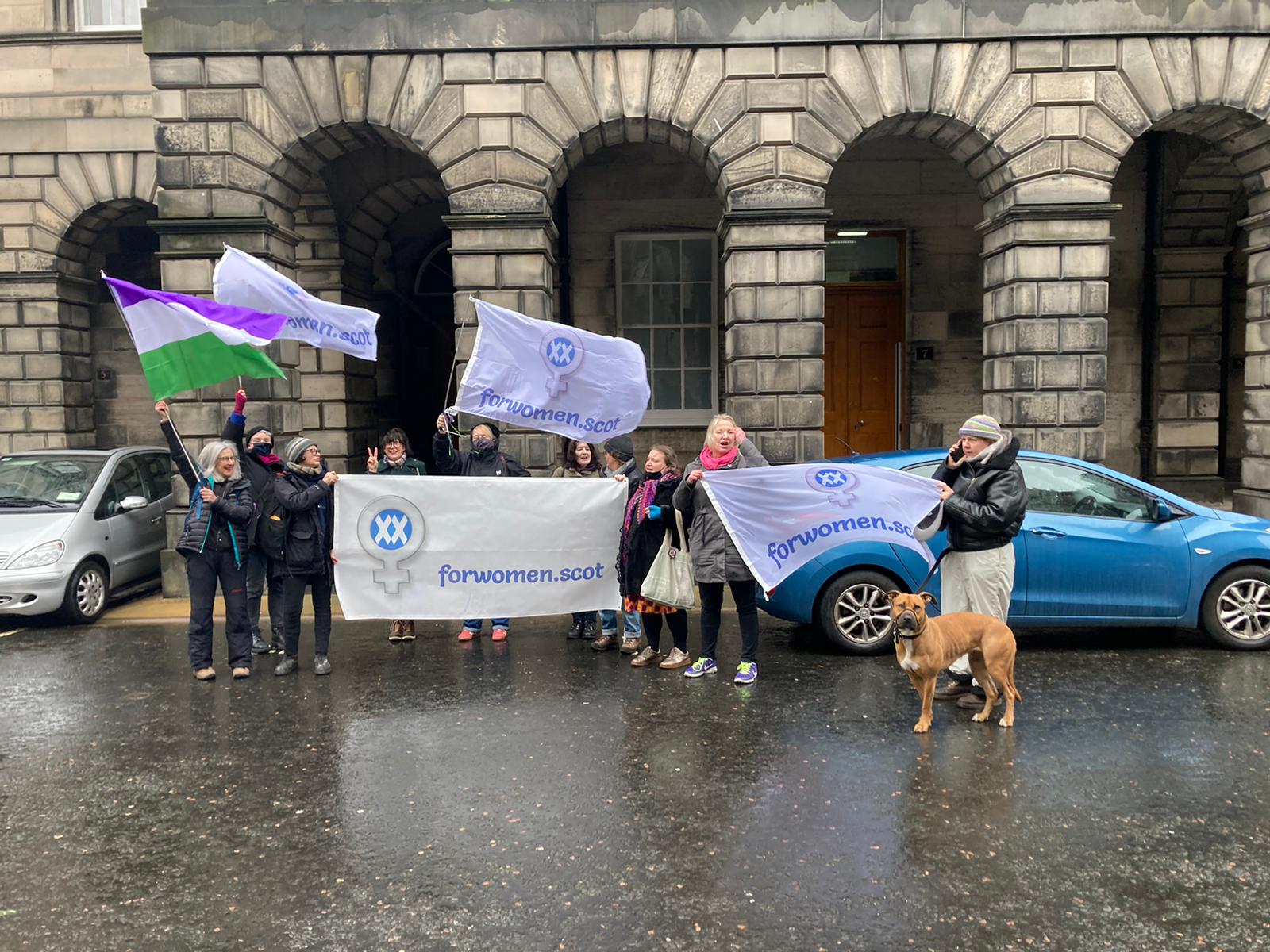 We are absolutely delighted to report that after more than 18 months of legal action we have won the appeal of our judicial review. The Court of Session has ruled that the Scottish Government exceeded its powers by including transwomen in the definition of woman in the Gender Representation on Public Boards (Scotland) Act 2018.

The full decision of the court can be read HERE.

The judges have restated that the protected characteristic of sex refers to either a male or a female and that provisions in favour of women must, by definition, exclude those who are biologically male.

It confirms that sex is significant in law and that women’s concerns about the undermining of the protected characteristic are valid.

Key points from the judgment:

There will be a final ‘remedy’ court hearing where we will seek to remove the unlawful sections of the Act and the statutory guidance. This will restore the legislation to its original intention of increasing women’s participation on public boards.

Our success was reported in several newspapers:

We were also mentioned in Neale Hanvey’s powerful speech at the debate on reform of the Gender Recognition Act at Westminster:

The consequences of this ruling have yet to be made clear but two important blogs have explored the issue:

The court’s decision in the For Women Scotland case is in my view a defeat of catastrophic proportions for the Scottish Government.

Just how catastrophic will only emerge as the dominoes start to tumble but the most immediate casualty must surely be the Government’s enforced “trans inclusive” funding policies, under which service organisations which are, in terms, exclusively for women must nonetheless make provision for serving biological males in order to qualify for Government funding.

In my opinion, the court’s decision now confirms what some of us have suspected for a long time.

That policy is unlawful, and should be struck down if challenged.

Every one of these organisations should be consulting their lawyers right now.

For Women Scotland: What Their Victory Means

So, if the Gender Recognition Reform (Scotland) Bill seeks to redefine “a woman”, as I think it does, then it is beyond the legislative competence of The Scottish Parliament.

In a column in the National, Joanna Cherry made the following comments on the impact of the ruling on the possible upcoming introduction of a bill to reform the Gender Recognition Act.

Instead, it took Scotland’s Supreme Court, the Inner House of the Court of Session, chaired by Lady Dorian, Scotland’s second-most senior judge and the first woman ever to hold the role, to remind us that at least under the Equality Act, a piece of legislation largely reserved to Westminster, a woman is a female of any age and provisions in favour of women, by definition, exclude those who are biologically male.

This ruling would not have been secured had it not been for the fundraising efforts of For Women Scotland. This grassroots feminist organisation run by volunteers and financed by small donations took on both the Scottish Government and organisations largely funded by the government to successfully challenge the expansion of the definition of woman for the purpose of the Gender Representation on Public Boards (Scotland) Act 2018.

The essence of this decision is that the Scottish Parliament cannot redefine what a woman is under the Equality Act because that is a reserved matter. It could well have significant implications for the draft Gender Recognition Bill which it is understood the Scottish Government had intended to introduce to Parliament yesterday. Yesterday came and went with no bill and now we understand that there will be a ministerial statement next Thursday. If the current draft of the bill introduces a system of self-identification of sex, there would be clear implications for provision of single-sex services to women under the Equality Act.

More viewpoints from the last few days include Susan Dalgety whose article Will the Scottish government push ahead with bad law or show sense with further discussions on impact of self-ID? was first published in the Scotsman, Mandy Rhodes with The Right To Be in Holyrood, Alex Massie with Making trans lives easier is a social, not legal, issue in the Sunday Times, and MurrayBlackburnMackenzie’s blog Two recent court rulings in Scotland: bad news for Scotland’s census but good news for public data collection.

From the bottom of our hearts, Marion, Trina, Susan and all at For Women Scotland, thank everyone for all the donations and support that has enabled this action. We will update on the Crowdjustice finances after the remedy hearing. It has been a supreme effort BY WOMEN and a magnificent result FOR WOMEN in Scotland.

Update: 22 March 2022
After today’s remedy hearing the court found the Scottish Government liable for expenses and declared that:

Update: 21 September 2022
All costs and expenses for bringing this judicial review have now been settled.