This is the full transcript of a speech given by Nicole Jones at Camden Town Hall for the We Need to Talk event. 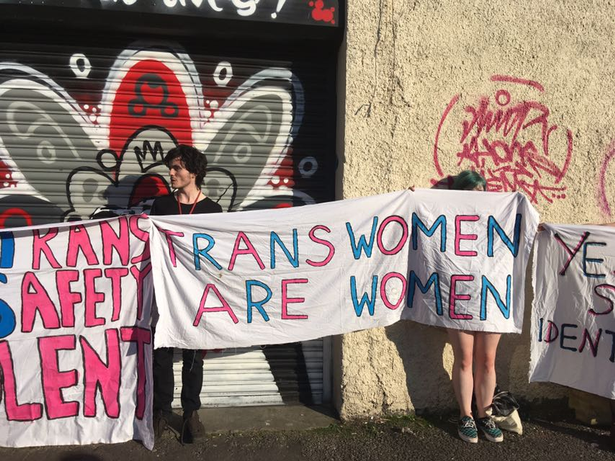 In 1697, 20 year old Edinburgh student Thomas Aikenhead was the last person to be executed for blasphemy in the U.K. Now, “blasphemy” is so passé. Institutions have adopted the handy euphemism “violent and disorderly conduct” or “hate speech” to cover their tracks when persecuting and reprimanding speech they believe to be unholy. To illustrate my point, I have taken a passage from Aikenhead’s 1696 indictment, and modernised it by replacing the “prisoner” with “TERF” and “the scriptures” with “transgender ideology”.

“The [TERF] has repeatedly maintained, in conversation[…] that [transgender ideology] is stuffed with such madness, nonsense and contradictions, that she admired the world being so long deluded by it.”

The protests that surround events like We Need to Talk I have only seen in the context of blasphemy. One example is the protests for the Richard Thomas and Stewart Lee play Jerry Springer the Opera, in which hundreds of religious protesters gathered outside the BBC buildings to protest their decision to air the show, calling for senior staff to be sacked. If it sounds familiar it’s because the tactics are the same.

Pious, blue haired believers frequently take to the streets with pots and pans in an attempt to deny us the right to assembly, association and freedom of speech. Astoundingly, Venice’s event in Bristol was the first event on this topic to go ahead in the advertised venue.

On the topic of the BBC, last year broadcaster Jenni Murray was issued an impartiality warning after writing an article critical of the dogmatic rhetoric that “transwomen are women”. According to the BBC, what women are is “controversial topic” for a woman to speak on.

As any woman who has publicly or personally criticised transgender ideology will be aware, this is a relatively unremarkable response. The climate surrounding discussion on the proposed changes to the gender recognition act and equality law is depressing in its likeness to the Harry Enfield sketch — women know your limits!

Equally unremarkable is the chorus of LGBT charities condemning the content, as if they actually represent us. Stonewall’s campaign manager, Rachel Cohen, responded to the article with the following: “they are women — just like you and me — and their sense of their gender is as engrained in their identity as yours or mine.” Now, the assumption that my ‘sense of my gender” is “engrained” in my identity is telling. This person is a clearly a believer.

She goes on to say, “whether you are trans or not, your identity is yours alone. I do not question your identity Jenni, and in return, I wouldn’t expect you to question mine — or anyone else’s. What right do you have to do so?”

An argument constructed on a “sense” of gender, or an identity that is “yours alone” cannot be challenged because it self referential. In one video, youtuber Ash Hardell breaks down on the phone to her mother as she comes out as transgender. She describes her identity as going “beyond” clothes and roles, saying it’s “just like an internal sense”. Her mother can’t dispute this, of course. No one can dispute this. Similarly, Christians who purport to have a “personal relationship with God” cannot be challenged because their evidence is their own conviction. Can you prove that they don’t have a personal relationship with God? Can you prove that Ash doesn’t feel as if she is neither male or female?

Conviction, or words to that effect, make up the diagnostic criteria for transgenderism. Currently, you must receive a diagnosis of gender dysphoria and live two years as your desired gender before you can get a gender recognition certificate. “Consistent, persistent, insistent” is a phrase used in regards to transgender children, in which normal childish behaviours are apparently markers for their being trans.

Self identification, the process of merely filling in a form to change your legal status, removes the requirement of conviction. We are told it is a human rights violation, that the only quantifiable evidence we have for determining if someone is transgender, is intrusive. The form does include a declaration of intent to live a lifetime as the desired gender, but requires no proof. We must have faith. Surgery and hormones are now superfluous — identity alone is sufficient.

Much to the delight of an increasingly privatised NHS, self identification will result in an increased transgender population, with a decreased ease of access to the medications and procedures that were once seen as crucial by this community. If it takes nothing to be transgender, the government is required to give nothing to transgender people. This law is so ill conceived, it’s supporters so blinded by belief, that they would rather spend their time intimidating women than investigating with us the long term integrity of a law that effects them.

Part of the prerogative to silence debate is the unspoken acknowledgement that this is a law in conflict with other rights. When we point out the logical fallacy that if a resource is available for those who identify as X, the resource is available to everyone, we are apparently creating a false dichotomy. “Belief or religion” and “gender identity” are two protected characteristics that come into conflict with other rights. Gay marriage or sex specific spaces do not come into conflict with providing disability access. They can, however, conflict with a person’s beliefs or gender identity.

That gender should be enshrined in law ought to be a concern for any secularist. Gender identity is a faith-based claim, evidenced by your own conviction. It is not scientifically verifiable. That there is a male or female “essence” within us is about as intellectually coherent as notions of a “soul” or “Holy Spirit”. And yet, we are required as “courtesy” to reflect shared belief in our speech patterns, or we are guilty of the sin of “misgendering”.

Women’s boundaries are so negotiable, so easily disregarded, that what constitutes our very being is open for subjective interpretation on part of those who are not us. What Kate Millet might describe as an “ingenious form of interior colonisation”, the use of “preferred pronouns” is a dynamic involving tacit agreement on part of the oppressed that the subjective interpretations — no matter how removed they might be from our reality — are, in fact, correct. This reality is re-contextualised as that of a “cis woman”. To most women, “cis” is as obvious a distortion of the truth as is Eve having come from Adam’s rib.

As shown in the case of Thomas Aikenhead hundreds of years ago, when you operate under faith, you are immunised from standard methods of reason, and therefore capable of anything. Together, we must resist this modern day scripture. They can’t punch every TERF.