Just to keep on top of current events we thought we’d try a weekly roundup of all the stories/news/research/anything of interest. 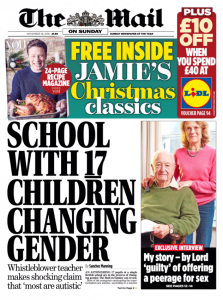 Big story of the day on the front page of the Mail on Sunday:
https://www.dailymail.co.uk/news/article-6401583/Ive-seen-girls-whove-changed-gender-groom-younger-ones-same.html

Well done for such extensive reporting on this issue!

Being discussed on Mumsnet here, and it’s worth showing that the wider discussion is also happening now on a much larger scale:

with Piers Morgan’s tweet attracting 11K likes and 1.3K comments for the statement “Bloody ridiculous – what the hell are we doing to our children????”

Sunday’s are well known round these parts for superb articles in The Times, and today was no exception: https://www.thetimes.co.uk/article/ambulance-chiefs-trap-defacer-of-unisex-signs-rcf0g0xc7.  Not so long after reports from Bristol of routine sexual harassment in the ambulance service it is very worrying to see women’s private changing spaces being removed without consultation or consent.  Strangely, I am not reassured by NHS resources being spent on handwriting analysis to find the indignant culprit responsible for returning the toilet signs to their original state! #IAmTheDefacer

Also included was a teaser for the upcoming TV programme Trans Kids: It’s Time to Talk which will be shown on Channel 4 at 10pm on Wednesday:
https://www.thetimes.co.uk/article/thank-god-they-didnt-make-this-tomboy-trans-thzt8xr3z

Final newspaper round up with a short article in the Morning Star – communists support women’s spaces.  And I thought we are all supposed to be in league with the far right?
https://morningstaronline.co.uk/article/communists-call-protection-womens-spaces?fbclid=IwAR1pxii-8JrPoEcCtNsXdh_lvkUiyva-hE2jzBBcEFOPUgwtZnzJLGsqvqs

And in crazy Twitter-land it seems they are doling out 7 day bans for quoting UK law on rape: 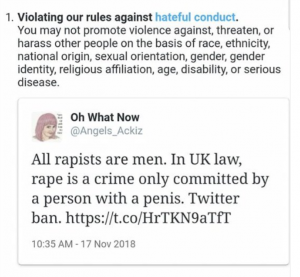 although to be fair the tweet is not strictly accurate as women can be convicted of rape under joint enterprise (although I believe there’s only been 2 cases of this in the last 17 years).

We also stand in support of Gallus Mag whose excellent site GenderTrender was removed by the censorship of WordPress who introduced a new policy against ‘deadnaming’.  Her response is here: https://4thwavenow.com/2018/11/17/wordpress-dumps-gendertrender-gallus-mag-responds/

The Times is still going strong, bringing us this:
https://www.thetimes.co.uk/article/transgender-murderer-paris-green-to-have-reassignment-surgery-on-nhs-hl80fnl7k

Call me cynical but I doubt Paris (who had to be moved from one women’s prison to another(!) for inappropriate behaviour and sexual activity) is going for full genital surgery.  Either way, with up to £60K surgery costs plus transportation security costs does anybody think this is good use of taxpayers money? 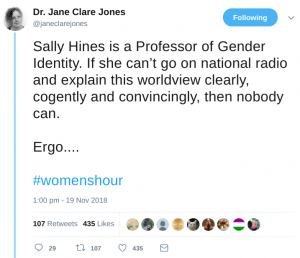 Kathleen Stock and Sally Hines were on Women’s Hour, Radio 4, discussing the difference between sex and gender.  Pretty much summed up by:

Not sure how long the BBC recording will be up for, but a transcript can be found here: https://janeclarejones.com/2018/11/20/burble-burble-intersex-burble-social-construct-burble-burble-trans-women-are-women-sally-hines-on-womans-hour/ along with some interesting marginalia. 🙂 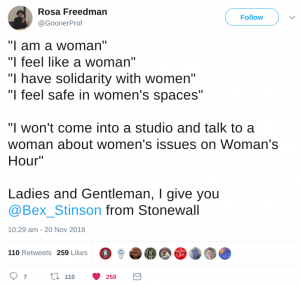 The debate on Women’s Hour continues with a discussion on why it is so difficult to talk about women’s rights and transgender rights.  Turns out that Stonewall, the group that has no problem talking to the NHS, councils, schools and employers about their transgender policies, has a problem discussing this face to face with anyone who has any reservations about the whole thing. #NoDebate rumbles on.

This morning started off with a debate in the House of Commons, Proposals to Allow Self-identification of Gender.  Many thanks to David Davies for speaking so well and a shame it was so poorly attended.  I am so disappointed in the female MPs who spoke, and their willingness to give away our rights to our very definition and the basis of our laws, quite distinct from men.  Perhaps the quality of the argument is best summed up by Layla Moran MP who can “see someone in their soul”, yet is blind to the male body in the female changing room.  Hansard transcript here.  Our statement here.

The day can only get better.  Cue an absolutely superb article by Maggie Mellon, ScotGov is embracing policies which will harm children – I and other feminists will challenge them: https://www.commonspace.scot/node/13575

And the long awaited TV programme: https://www.channel4.com/programmes/trans-kids-its-time-to-talk.  A thoughtful exploration of the issues surrounding trans children, ending on the poignant note “I think they’re lost, and they’re being led.”  Although certain quarters of Twitter were non too happy about the programme: 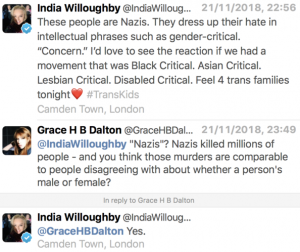 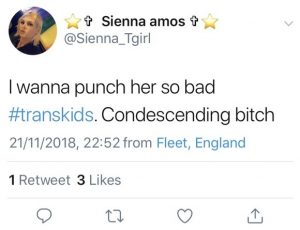 Searching Twitter for #transkids shows much frothing at the mouth and excessive swearing by transactivists in their comments.  Doesn’t say much for their credibility when they can’t be part of a conversation without getting aggressive and abusive. 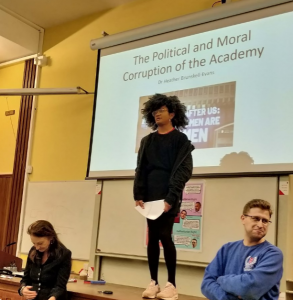 And finally, another meeting, this time at the University of Bristol Free Speech Society, and yet another interruption.  Yawn…

Talk about long awaited!  The Review of the Gender Recognition Act 2004 – Analysis of responses to the public consultation exercise has been published by the Scottish Government.
https://www.gov.scot/publications/review-gender-recognition-act-2004-analysis-responses-public-consultation-exercise-report/ 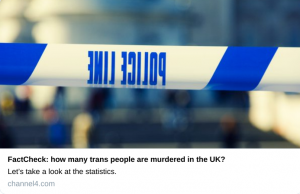 The limited data we’re working with suggests that in the UK at least, the “trans murder rate” is lower than the UK average.

The Scotsman and The Herald report on the GRA consultation results.  Over 400 comments on the first article and I’ve seen nary a one in favour so far.

Also in The Times.  Open access to the article for a limited time is here. 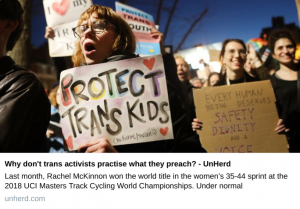 Final story for the week: Canadian feminist and editor of Feminist Current Meghan Murphy has been permanently banned from Twitter for refusing to delete a tweet in which she said, “men aren’t women”.

What a bizarre world!