A good article in the Sunday Times about the proposed census changes, which quotes Woman’s Place UK: “The inclusion of a third option to the question on sex would indicate a departure from the scientifically grounded theory of human sexual dimorphism … If the Scottish government believes that human beings are not sexually dimorphic, then ministers and the chief scientific and medical officers must provide evidence to support that claim.”
https://www.thetimes.co.uk/article/call-for-gender-id-question-in-next-census-qcfzv69x5 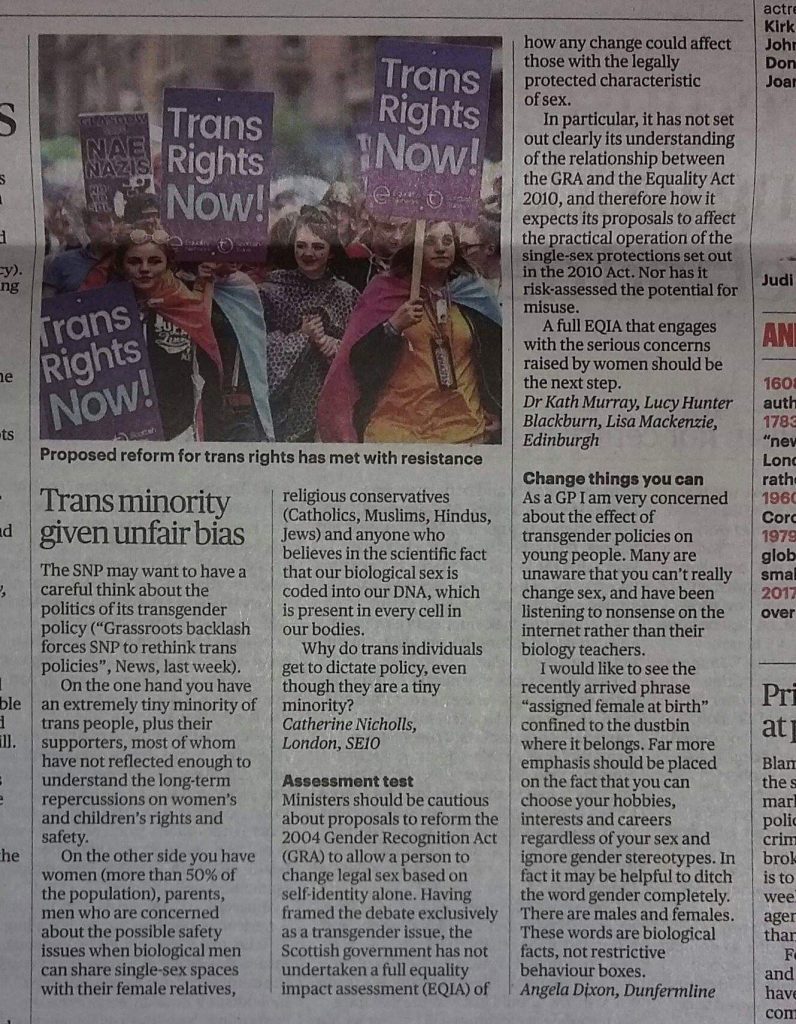 The second meeting of the Culture, Tourism, Europe and External Affairs Committee to discuss the Census (Amendment) (Scotland) Bill with data users:

Transcript of the meeting is here.  All evidence submitted to the Committee is here.

Our comments are on Twitter:
Second session of @SP_European census hearing. Panellists stressing importance of integrity of data on binary nature of sex for health, education etc & importance to separate sex & gender.
Panellists feel that guidance on self ID as introduced in 2011 census should be reversed.
Stressing that we do not know impact of changing definitions (& possibly never will if changed) but they will affect some sub groups (e.g. young people in education) more than others.
Level of information needs to be balanced against user needs. Other data is captured in, for example, sexual attitudes survey.
Convener pointing out conflation that happens across government & local authority as a concern. Agreed by panel that it’s a fudge which needs to be set right.
Clare Baker asking who was consulted on change to 2011 wording on sex. Questions as to whether it was scrutinized & how determined.
So happy to see some of the points we picked up after the second panel last week regarding the council’s use of data was aired.
Even more delighted that there was a general agreement that this needs to be addressed and sex & gender must be distinctly defined.