Two articles in The Times today:

The Scottish government is to rethink its approach to transgender rights after a backlash from influential Nationalists and grassroots SNP members. “First minister Nicola Sturgeon is understood to be “alive” to the issue.”:
https://www.thetimes.co.uk/article/grassroots-backlash-forces-snp-to-rethink-trans-policies-n0pvh25qx

Gordon Pike, a senior Scottish prison official convicted of possessing 22,000 indecent images of children and now on the sex offenders’ register, was one of those responsible for introducing its “gender identity and gender reassignment policy” which places men in women’s prisons according to their self identification.
https://www.thetimes.co.uk/article/sex-offender-gordon-pike-helped-set-prison-trans-rules-q8n3lnksv

Women’s Hour, Radio 4 continues its series on sex and gender by asking: is all the talk about gender identity ignoring sexuality?  The discussion with Julie Bindel and Linda Riley can be heard here: https://www.bbc.co.uk/programmes/m0001d8k

Linda seemed unable to differentiate between lesbians and straight men who identify as women and was oblivious to the pressure lesbians are under to accept male bodied sexual partners.  Some of it is documented here by @tiiiired from Twitter:
https://drive.google.com/drive/folders/13vfYxPdJ-HeeLfk_EDg9fR9lUx2NFWpd
(Worth noting @sargesalute brought this collection of screenshots to Linda’s attention in July 2018: https://twitter.com/sargesalute/status/1021039460702720000) 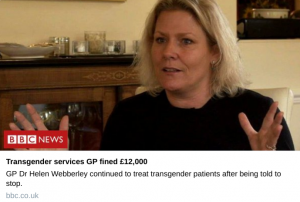 Helen Webberley now has a criminal conviction.  She was fined £12,000 and the GMC’s investigation into Dr Webberley has been extended for a further 12 months. Her clinic has now been moved to England where it has still not been registered with regulators. 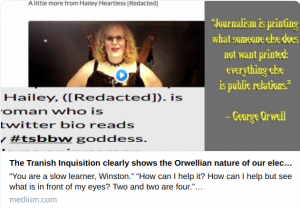 “You should all be incredibly terrified about what this means for the fabric of the society you live in.”  Excellent article of the Orwellian trans activist world we already live in.  Let’s hope the article is not censored by WordPress.
(Edit: It lasted one day!! Link now goes to an archive copy.)

The programme prompted much outrage on Mumsnet and Twitter.  C’mon, it’s a no brainer: no-one who has ever participated in sport can be under any illusion that men in general are not bigger, stronger, faster than women!

And in real life: 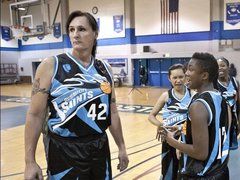 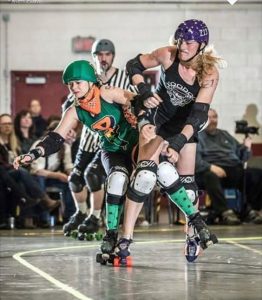 It’s not just elite sports – here’s the advice LGBT Youth Scotland currently give to Scottish schools.  Girls lose out at all levels of sport.

In other news, a report in the Times mentions our group: 🙂
https://www.thetimes.co.uk/article/feminists-fight-against-gender-choice-in-census-b6h8pq2nf
We will be giving oral evidence in Parliament on Thursday 6th December on the Census (Amendment) (Scotland) Bill.  Our submission calling for the retention of the Census question on sex can be found here:
http://www.parliament.scot/parliamentarybusiness/CurrentCommittees/109902.aspx

Parliament written answers have shown that in order to receive funding many women’s organisations are compelled to have a trans inclusive policy.

Important background on academic concerns behind the change to the census, outlined in the Herald: 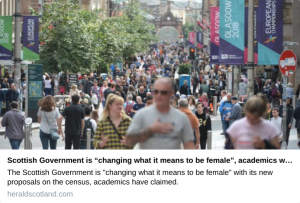 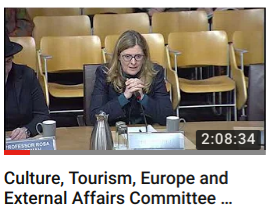 The official report with a transcript of the meeting is here, and supplementary information provided by Rosa Freedman is in Annexe B.

James Kirkup of the Spectator has written about the abuse and intimidation of women for simply talking about this subject, “Rosa Freedman is a legal academic. Her job is to analyse and study the law and debate the law. For doing so in the context of transgender rights, she says she has been abused, followed and scared. She says she has had urine sprayed on her door and into her office. She says she has been threatened with rape and murder.”
https://blogs.spectator.co.uk/2018/12/women-are-abused-in-the-name-of-trans-rights-but-do-mps-care/

Some good #AsktheMinister questions were also being asked in the Equalities and Human Rights Committee meeting:
Video and transcript.

Some people really don’t like women having opinions. This Twitter thread has a link to an awful/hilarious article about Mumsnet. 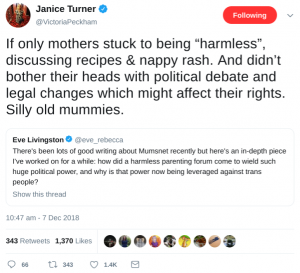 Of course, there’s a Mumsnet thread about it here.

“We need to understand the rapid increase in referrals of girls and any relationship with gender identity legislation, the interplay between gender dysphoria, sexual orientation, and unpalatable roles in our highly-gendered society..” 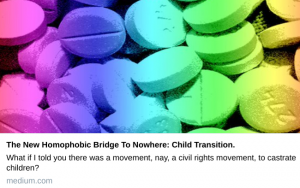 All you ever wanted to know about puberty blockers and much more. A very long read but one to bookmark for reference.

And last one for the week – a good letter in The Times: 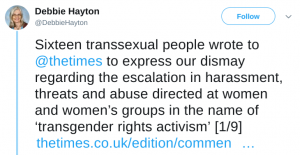