including an article about the SNP in Haddington, who are calling for urgent review of LGBT Youth’s school guidance Supporting Transgender Young People which has been adopted “apparently without any consultation, evaluation or risk assessment”.

For those non-subscribers to The Times online: 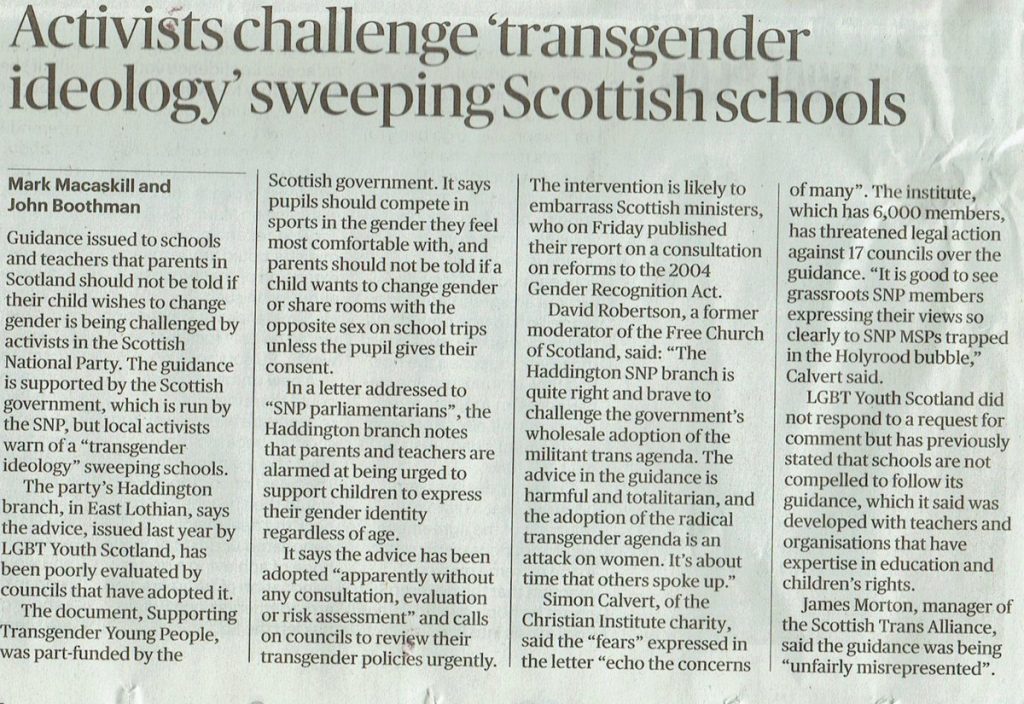 According to the article “LGBT Youth Scotland did not respond to a request for comment but has previously stated that schools are not compelled to follow its guidance, which it said was developed with teachers and organisations that have expertise in education and children’s rights.”  However, Edinburgh Council, at least, regards compliance with the guidance as a measure of success: 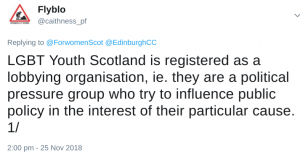 This Twitter thread also pointed out the legislation that schools are compelled to abide by, given that LGBT Youth is a registered lobbying organisation: 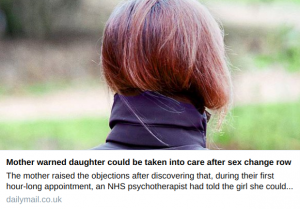 And a final news story – a 13 year-old girl ‘comes out’ as transgender after being bullied for being lesbian. Both school and CAMHs simply ‘affirm’ her as a boy.  The parents try to protect their daughter and social services are called.  This is really happening in the UK (and let’s not forget the worrying combination with the Named Person scheme).

Found one more article worth a read, “questions are rarely settled without debate”:
https://amp.theguardian.com/commentisfree/2018/nov/25/debate-ends-when-we-label-views-we-disagree-with-us-hatred

Women’s Hour, Radio 4 are discussing the law on sex and gender with Alex Sharpe and Rosa Freedman – separately, as Professor Sharpe, a human rights barrister, is not prepared to debate this issue with anyone holding a different view.
https://www.bbc.co.uk/sounds/play/m00019m5
Interesting discussion on Mumsnet including a transcript of the interviews and much pondering on the meaning of cissexual.  Apparently us women can now be cissexual but not cisgender, or something – shame no-one thinks to ask before relabelling us.

Our blog with a positive update about single sex accommodation by Hostelling Scotland and Serco (Caledonian Sleeper and Northlink Ferries):
https://forwomen.scot/26/11/2018/hostelling-scotland-caledonian-sleeper-northlink-ferries-update/

It’s been noticed that the twitter account of the Scottish Government is displaying a ‘Dear transphobes’ message as their header, just days after the publication of the GRA consultation results: 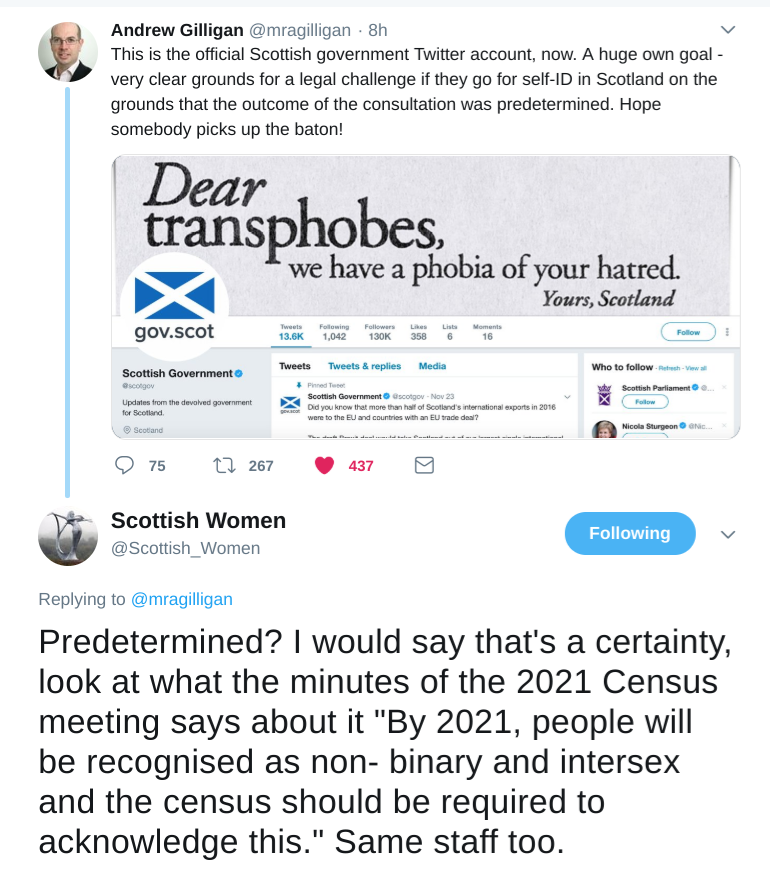 I rather liked this response: 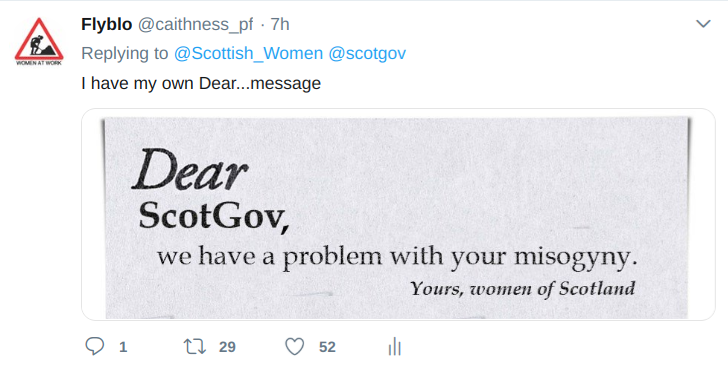 Scottish Women has published an update with a response from the Scottish Government: https://scottish-women.com/2018/11/26/update-reply-from-the-scottish-government/.  Some excellently framed questions regarding girls, schools and the Equality Act – with no commitment for action in reply.

Women’s Hour discussing how well schools doing at safeguarding the vulnerable children who feel that their gender identity does not match their birth sex, with Layla Moran and Michele Moore: https://www.bbc.co.uk/sounds/play/m0001b09

Meghan Murphy: Twitter’s Trans-Activist Decree
“It’s time for all of us – not just women and feminists, who are now taking the worst of it – to put their collective foot down and demand a return to sanity.”

Interesting case in Norway (which has self-identification of sex) where a woman was accused of harassment for questioning a man who uses the women’s changing room at a fitness centre: http://womenwhosayno.blogspot.com/2018/10/norway-woman-is-accused-of-harassment.html 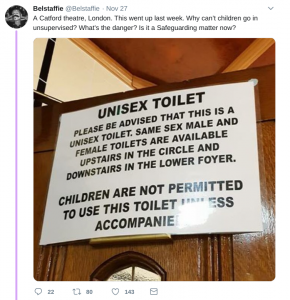 This poster kind of looks like they might be implying children aren’t safe in mixed sex spaces: 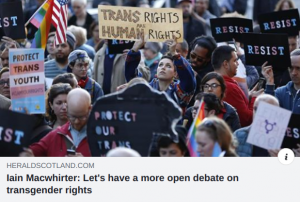 “The political parties should lift their omertà on discussion of the GRA. The law should not be changed until the wider public have been informed and engaged. We need to talk about what it means to be human in the 21st century.”

Excellent start to the day – Julia Hartley-Brewer: ‘I’m not a cis woman – there are only women or trans women’.  But how many times did she have to say ‘No’ before he listened?!
https://talkradio.co.uk/news/julia-hartley-brewer-im-not-cis-woman-there-are-only-women-or-trans-women-18113029022#gyKcyMBYiJwo7Orl.99
On Twitter: https://twitter.com/talkRADIO/status/1068434726908776448 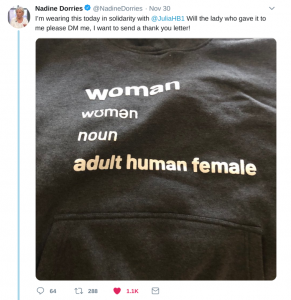 And Nadine Dorries comes out in solidarity 🙂

Good article by Julian Norman, perhaps a good summation to give to your MSPs of how GRA law change will affect women’s rights under the Equality Act:
https://www.counselmagazine.co.uk/articles/gender-recognition-self-id-and-next-steps

See Shahrar Ali’s Twitter for his formal letter under the whistle blowing policy about the misuse of the Greens complaints procedure to discipline party members for ‘transphobia’.  “Either we have managed to foster culture of transphobia in our Party of epidemic proportions; or complaints process being subverted to silence those who wish to debate our policies in area of great complexity & some controversy. Debate should be encouraged not disciplined” 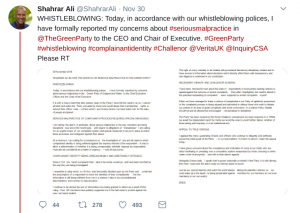 Hopefully, the other political parties are watching closely. 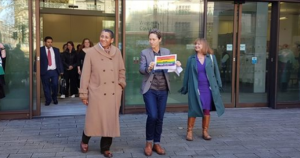 And finally, the best news of the day – the private prosecution against Venice Allan and Linda Bellos has been discontinued. “it was a politically motivated and vexatious prosecution”: 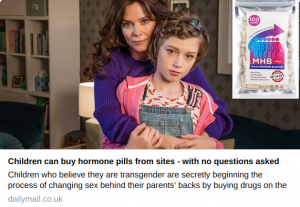 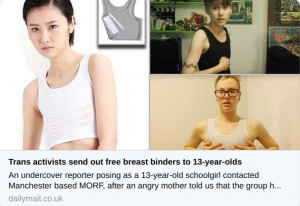 And, as always, good discussions on Mumsnet here and here.